The Waldorf Hilton, one of London’s most iconic hotels, has a unique 110-year history with strong links to theatreland stretching back to the Gaiety Girls and their wealthy admirers. This West End landmark hotel is the official hotel partner of the hit musical Chicago which returned to the West End this spring at the Phoenix Theatre starring Oscar-winning Hollywood actor Cuba Gooding Junior in the role of Billy Flynn (until 30 June). 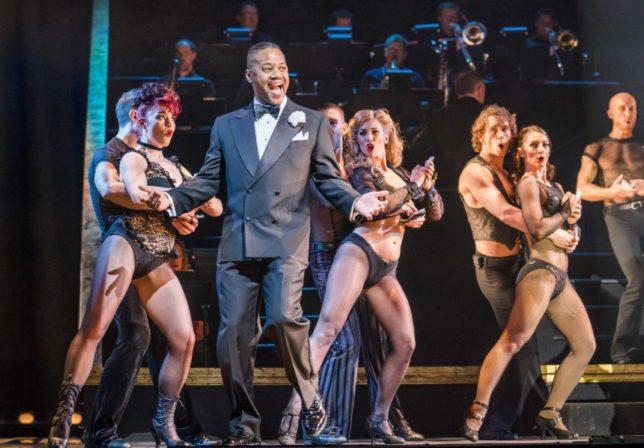 The theatre partnership is the first announced by the Waldorf Hilton this year, as it carves out its position as the home of theatre and entertainment for those visiting London, and locals alike. To celebrate its official hotel partner status with Chicago, The Waldorf Hilton has designed a special Chicago Cocktail and Pizza Menu at Good Godfreys Bar & Lounge – inspired by hits from the famous musical. 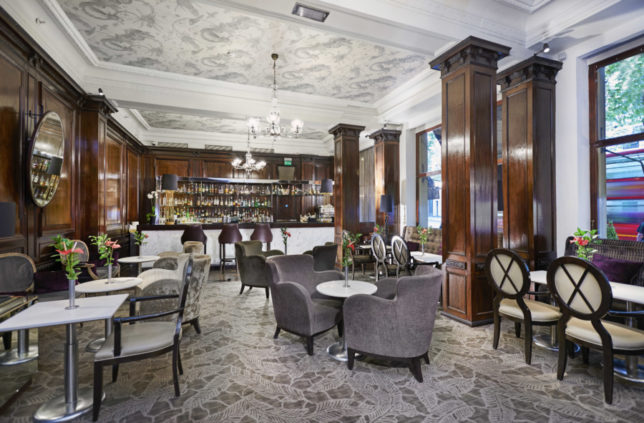 For guests who are looking for a more formal warm up to a theatre experience, The Waldorf has also created a brand-new pre-theatre dinner menu with Jazz Singer Blue Rose performing West End classics to diners on Thursday evenings – the perfect complement to a night of entertainment in the West End. We should know having had a front row seat at one of Blue Rose’s last appearances  singing at the hotel. 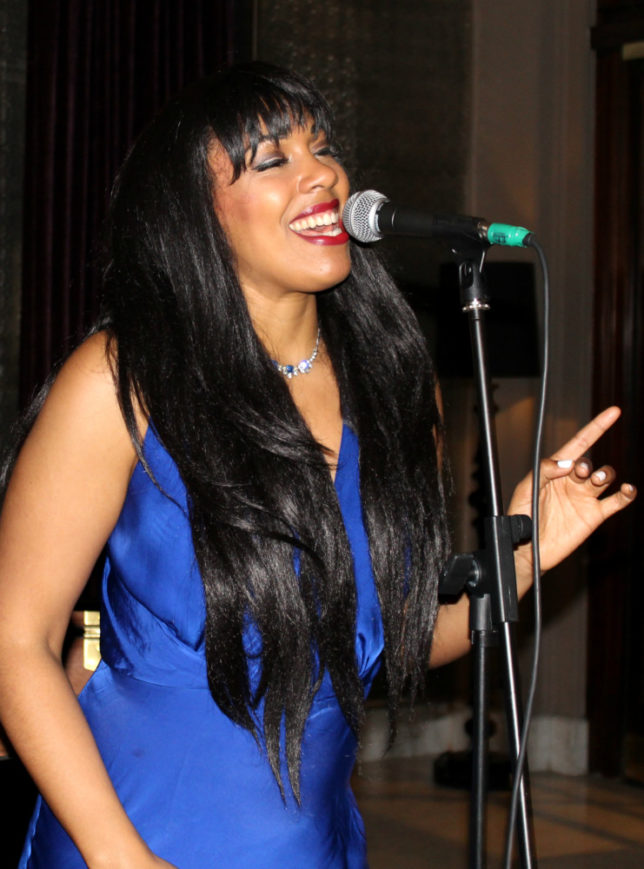 Originally the vision of thespian Edward Sanders who managed a theatre at the time, The Waldorf was built 110 years ago in a unique location – bookended by two of the West End’s most prestigious theatres. Given this history and its long links to the West End, the hotel’s strategy is to align itself to London’s theatre and entertainment scene by brokering special relationships with the latest theatre productions, as well as redesigning the hotel’s pre-theatre offering – ensuring memorable guest experiences both inside, and outside the hotel. 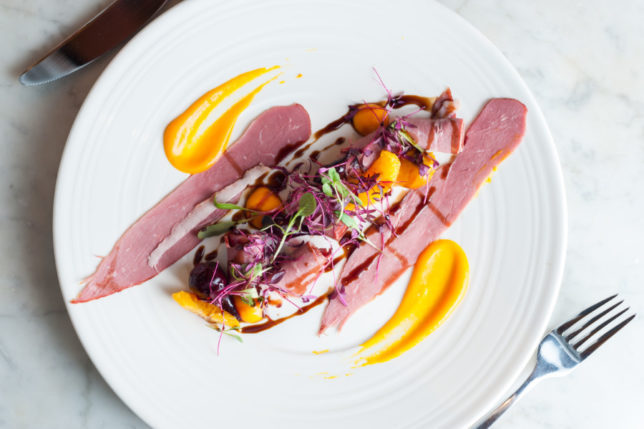 The Waldorf Hilton General Manager Guy Hilton commented, “We are excited to have set up this partnership with Chicago and have agreed The Waldorf as the musical’s official hotel partner this year. With our long history in the heart of the West End, the hotel is perfectly located for cast, crew and visitors who are looking to come and enjoy the show. The partnership will mean our guests can enjoy the full Chicago experience with special star treatment at the show itself, as well as insider insight from our concierge team.” 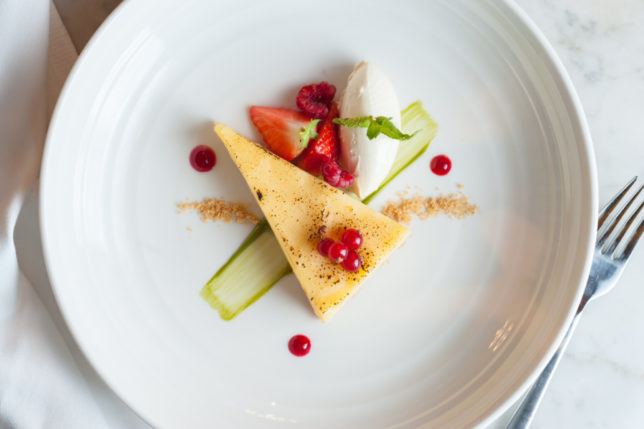 The Waldorf hotel’s guests can also buy a ‘Band A’ ticket and receive a free glass of wine at Chicago. The offer is valid for Monday to Thursday performances until 30 July 2018.  Book at m.atgtickets.com/venues/phoenix-theatre/ using the code “Hilton”. 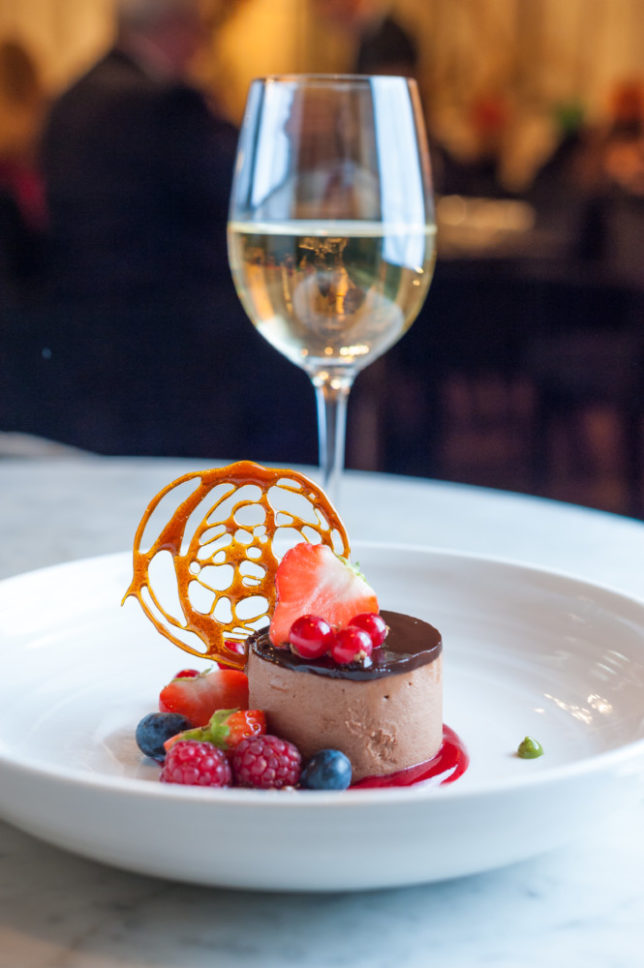 Dining in the stunning surroundings of the Waldorf Hilton’s Homage Restaurant is certainly a theatrical affair in what was once the Grand Ballroom of the hotel. It was the perfect place to begin our evening with the delights of the pre-theatre menu before our short walk across to the Phoenix Theatre to enjoy a performance of the musical Chicago with Cuba Gooding Jr in one of his last appearances before finishing his run as Billy Flynn this June. 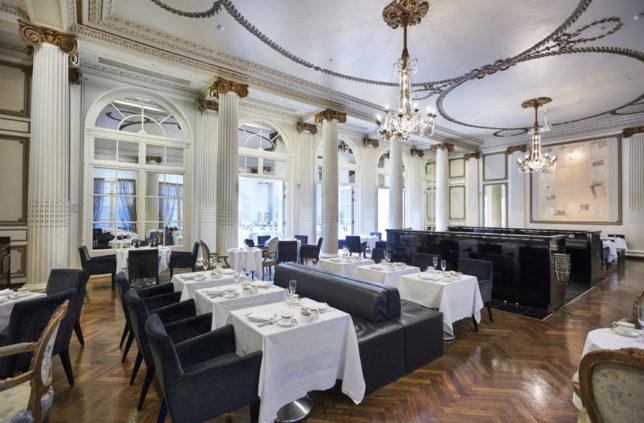 We started with Chicago inspired cocktail ‘Funny Honey’ to get us in the mood. The cocktail is named after oone of Roxie’s first songs in the musical. It was deliciously sweet and included a real piece of fresh honeycomb. It tasted so good it was almost criminal! 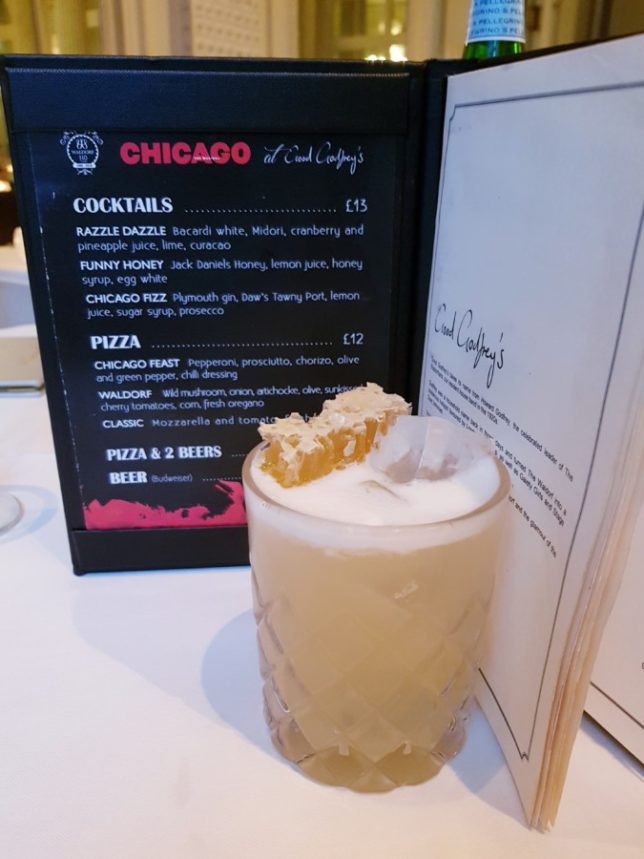 We started with the pan-seared scallops with BBQ cauliflower, smoked bacon, sweet corn and grapefruit. They say good things come in small packages and this dish is no exception. The fresh flavours combine well and the textures explode on palate. 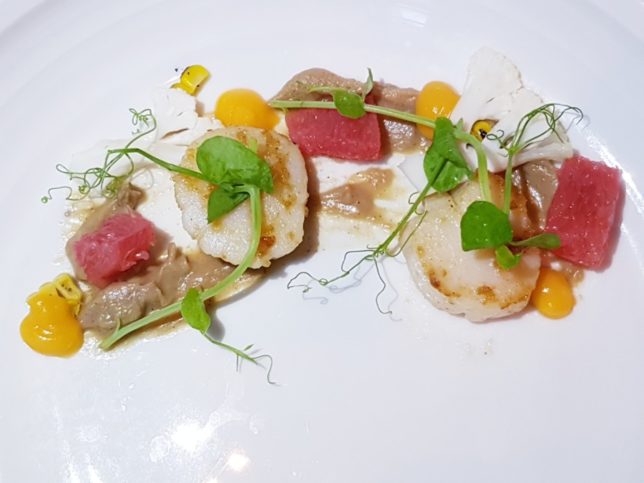 My dining companion had the Scotched Hen’s egg with English asparagus, chive and truffle. The hefty scotched egg was sure to satisfy hungry appetites. 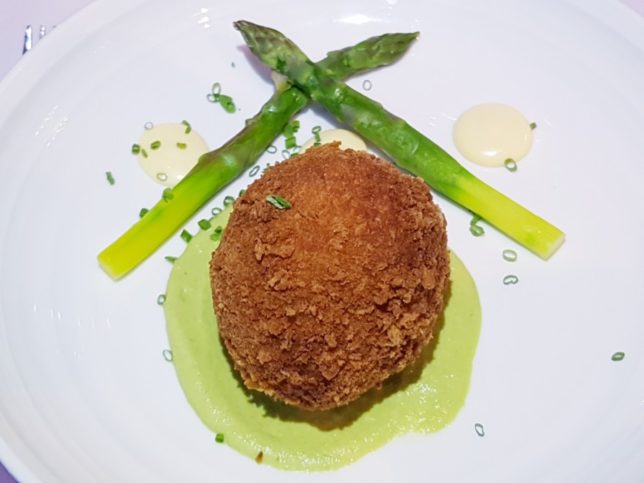 We cut into the egg and saw the golden yolk cooked to perfection. The meat surrounding the egg was moist and tender with the asparagus adding a fresh dimension to this classic appetizer. 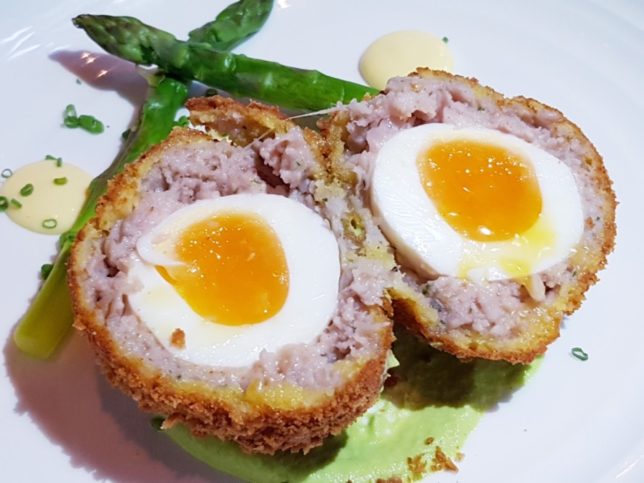 For the main course, I chose the pan-fried loin of lamb with lamb shoulder, sheep’s curd croquette, peas, lettuce, girolle and jus. The dish is colourful with elements of surprise. The croquette paired well the lamb. The loin was cooked medium rare and was soft and juicy. The lamb shoulder had a pronounced flavour which matched perfectly with the rich jus. Overall a great dish that has a lot of variation to keep you anticipating your the next bite. 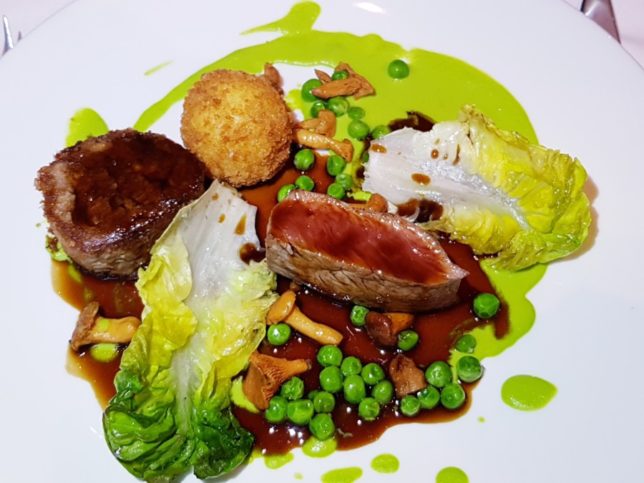 The main dishes were accompanied with some delicious triple cooked chips and indulgent truffle macaroni cheese. 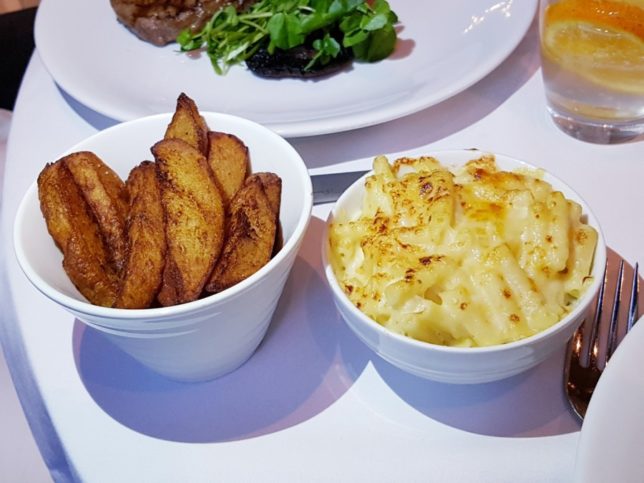 My dining companion chose the Casterbridge Rib Eye Steak cooked medium rare. The steak was flavourful and tender. What a meaty treat enrobed in the glistening red wine sauce. 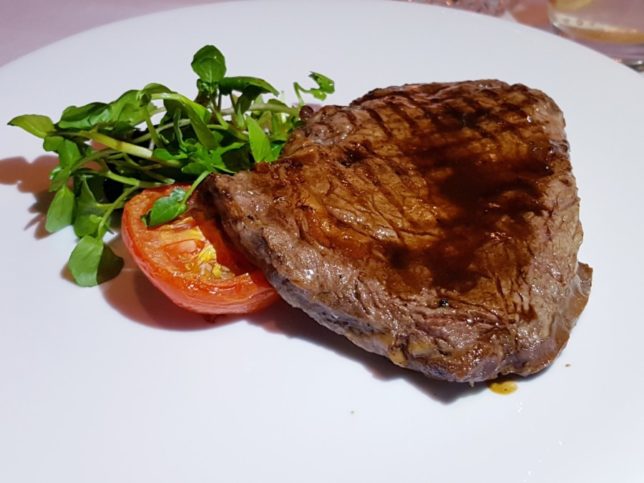 To finish I had  the passion fruit crème brûlée with ginger snap biscuit. The tartness of the passion fruit was balanced by the creaminess of this reimagined classic. The ginger snap biscuit refreshed your taste buds so you can dive right into the next mouthwatering spoonful. A lovely dessert that continued the high standards of the restaurant’s pre-theatre dinner menu. 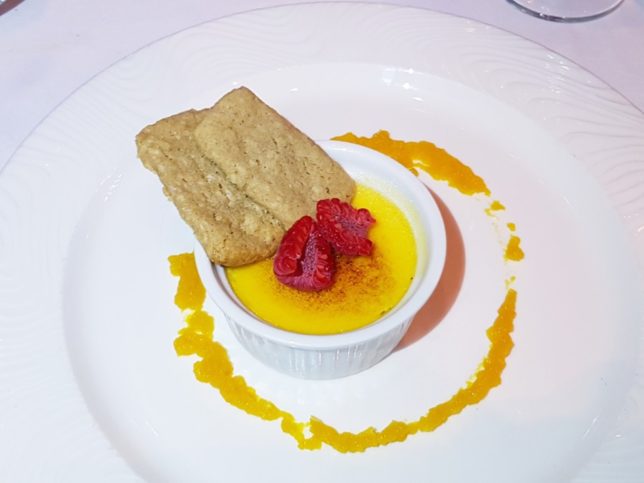 My dining companion enjoyed the bitter chocolate fondant, black cherry compote and ripple sorbet. The perfectly cooked fondant had a soft texture with melting interior and rich chocolatey flavour. The perfect way to end the meal and set us up for the short walk to the Phoenix Theatre. 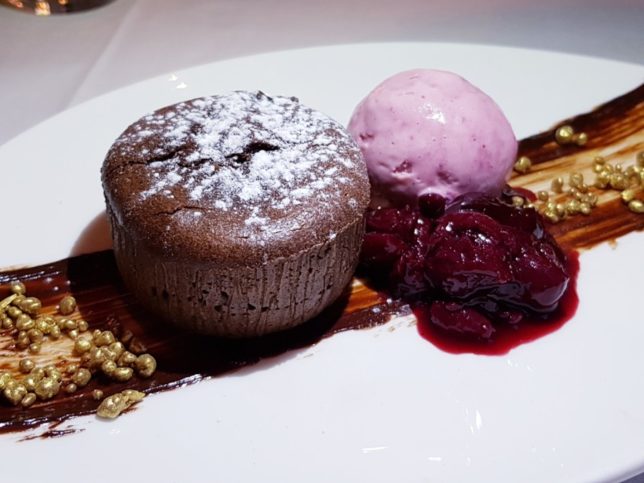 Upon arrival at the Phoenix Theatre, we picked up our tickets at the Box Office before making our way to the bar to enjoy a couple of flutes of Veuve Clicquot cocktails. It’s been 6 years since Chicago played on a West End stage so not surprisingly we took our seats in anticipation for the start of the smash-hit American musical starring Academy Award-winning actor Cuba Gooding Jr as Billy Flynn. 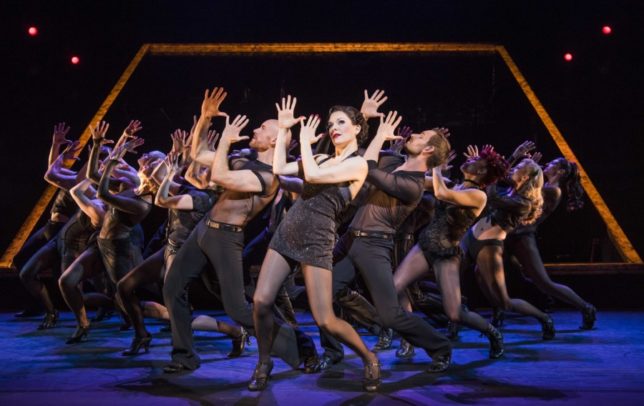 The performance kicked off with the well-known show-stopper All That Jazz led by Josefina Gabrielle in the role of Velma supported by the talented and handsome cast. Staging and costumes were on point with the singing and dancing a riotous delight. Gabrielle was a sexy sassy Velma and Sarah had great comic timing and delivered a classy performance as Roxie. 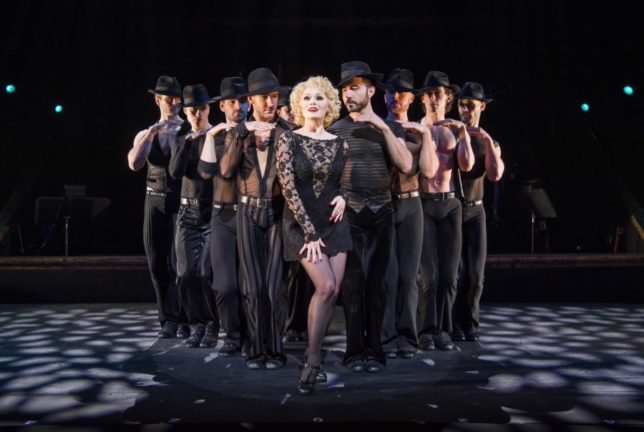 Roxie and her boys in Chicago The Musical ©Tristram Kenton

The production, with its vintage design and choreography, will delight fans who are familiar with the original 1996 production however things do look a little dated. Saying that the lead actors give it their best shot – especially Gabrielle and Soetaert – the latter steals the show as Roxie with her comic mutability shifting from goofy to fierce to compelling. 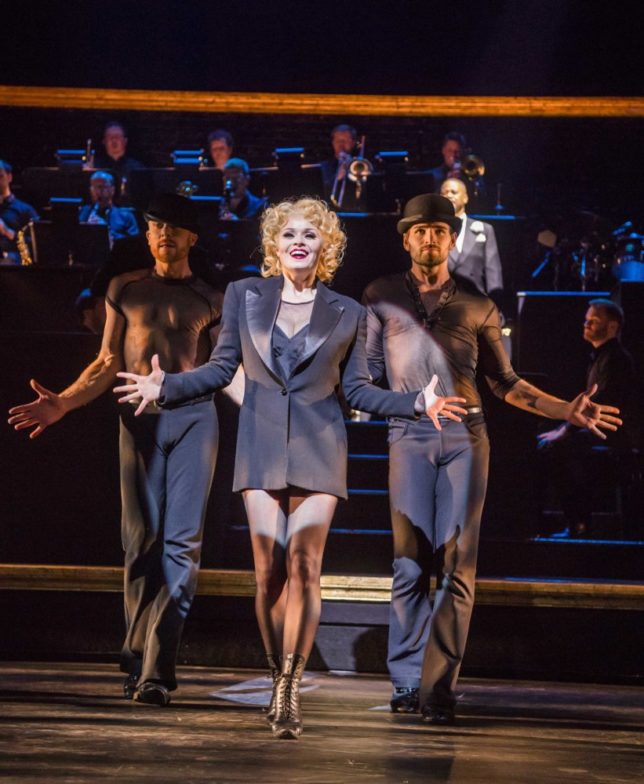 Sarah Soetaert as Roxie in Chicago The Musical ©Tristram Kenton

Chicago is a definite must-see show-stopping musical and its great to have it back in the West End at Phoenix Theatre. Paired with the delicious pre-theatre menu at Waldorf Hilton, this is a night out you’ll be talking about long after the curtain drops.