Brocket Hall located in Welwyn, Herts is one of Britain’s premier stately homes and country estates and is just 20 miles from London. It has been home to former British prime ministers Lord Melbourne and Lord Palmerston, is the place at which Lady Caroline Lamb conducted her scandalous drug fueled affair with Lord Byron and where Margaret Thatcher wrote her memoirs. 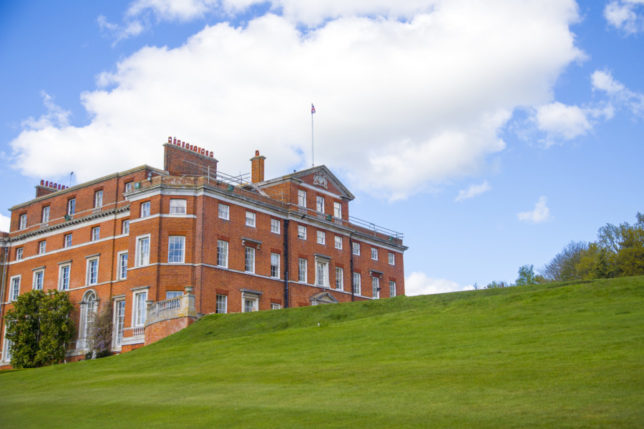 Brocket Hall has been both host and home to some immensely important characters, who through hundreds of years, have shaped events which have defined British social and political history. Imbued within the house and landscape of the estate are clues to a culture alive with royal scandal, passionate affairs, art and culture. 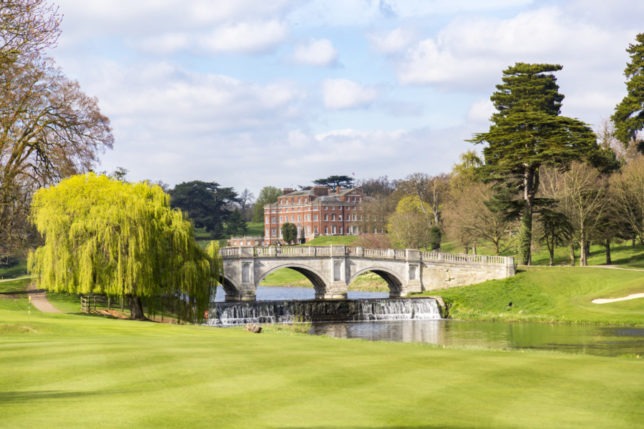 The wife of the first Lord Melbourne, son of Sir Matthew Lamb, who built the hall in 1760, was mistress to the flamboyant Prince Regent, later George IV, a regular visitor to the estate. 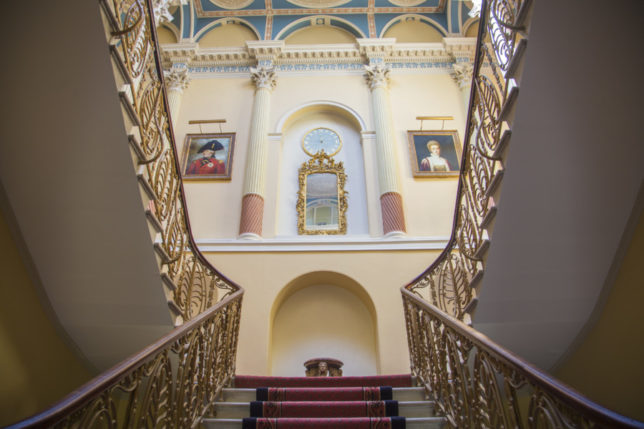 As wife of the second Lord Melbourne, Lady Caroline Lamb (who introduced the Waltz to England in the Ballroom) scandalised society when she conducted a wild and tempestuous relationship on the estate with Romantic poet Lord Byron. When Byron tired of her, Caroline built a bonfire outside the Hall burning all of the poet’s gifts together with an effigy of him. 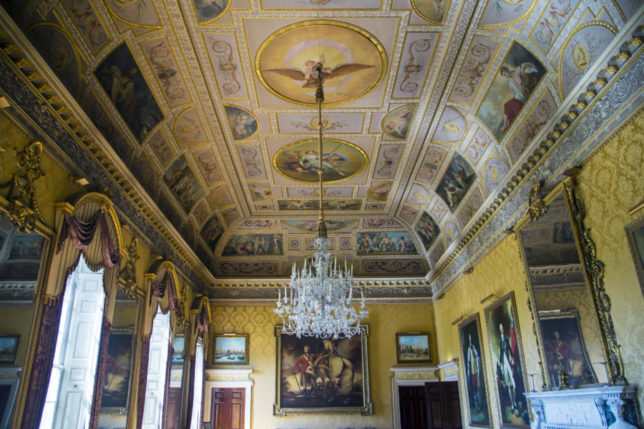 Lady Caroline’s husband became Prime Minister and formed a close relationship with Queen Victoria who was a frequent visitor to the estate. Brocket Hall was brought to fame recently on the popular ITV series ‘Victoria’ which focused on Queen Victoria’s special bond with Lord Melbourne.

Melbourne’s sister inherited the home and her husband, Lord Palmerston also became Prime Minister. Lord Palmerston died two days before his 81st birthday having reportedly said, “Die my dear doctor that is the last thing I shall do.” Palmerston was the last Prime Minister to die in office and therefore Brocket Hall can claim to be the only stately home to have seen two government leaders live and die within its walls. 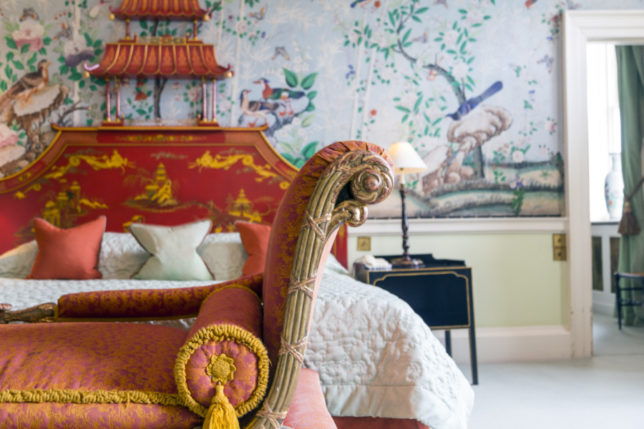 Brocket Hall also played its part in the war effort, when between 1939 and 1949 it became the London Maternity Hospital. The Prince Regent, Lord Melbourne and Queen Victoria Suites were all used when expectant mothers were evacuated from London. A total of 8,338 babies were born at Brocket Hall during this time. 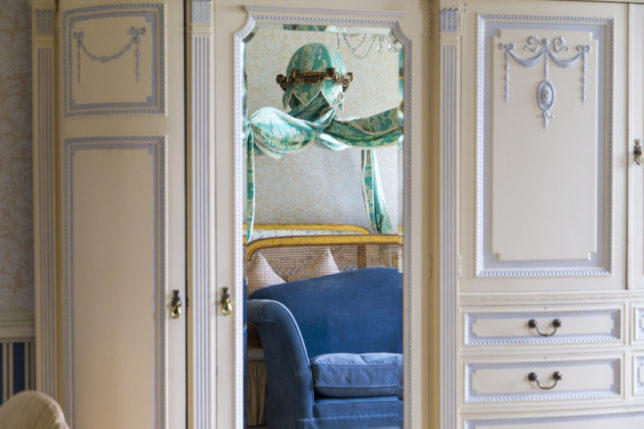 Some of the most celebrated guests to have experienced the charm and customs of the estate are featured in a photo gallery on the ground floor of the Hall. Notably, Margaret Thatcher who chose the private setting as the perfect place to reflect whilst writing her memoirs. 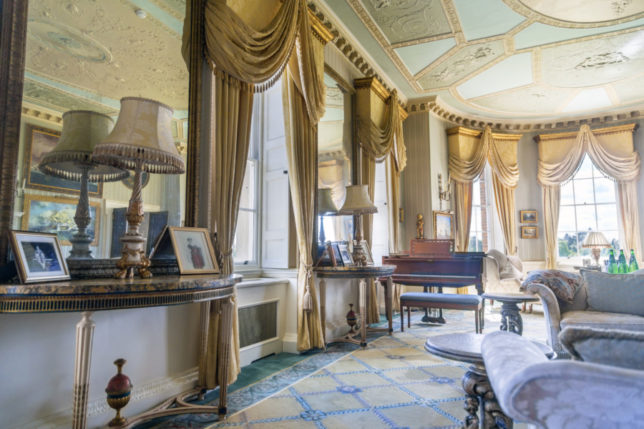 More recently Charles Nall-Cain, 3rd Baron Brocket, inherited the Hall in a semi-derelict state. He built the first golf course and opened the Hall as a conference centre, and since his tenure a second, much acclaimed championship golf course has been added along with the establishment of the Golf Academy, which nurtures some of England’s best young golfing talent. 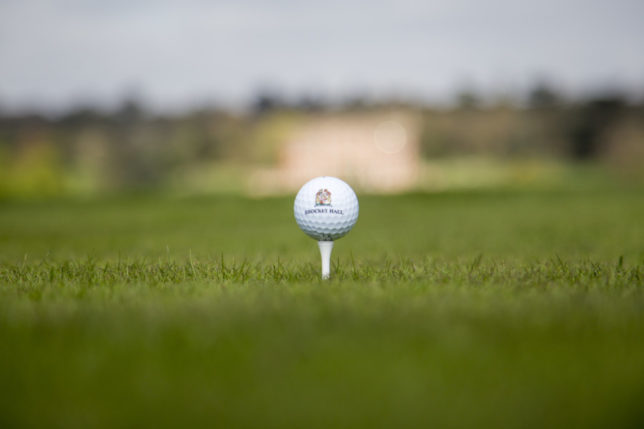 The jewel in Brocket’s crown is however the management’s commitment to preserving this wonderful estate and the important British traditions that are so much a part of our culture and national heritage. During our visit to Brocket Hall, we stayed at Melbourne Lodge, once home to some of the estate’s most important residents – the horses! These hardworking steeds were not only used by Lord Melbourne and his guests during the hunting season but also took part in the race days held on the private race course surrounding the Estate during the 18th Century.

Melbourne Lodge has since been converted into luxury accommodation for visitors to the golf club and Brocket’s restaurants. The 16 bedrooms are decorated in traditional country house style to provide a relaxing and luxurious experience for guests. We stayed in the Nijinsky room, as each room is named after one of the great racehorses of the day. Our room was spacious and beautifully furnished with original pieces from the Estate to add to the historic ambiance of the place.

Booked in for the Auberge Experience, we were looking forward to dinner that evening at the award winning and highly acclaimed Auberge du Lac restaurant set in the Hall’s former hunting lodge on the banks of the Broadwater overlooking the stately home. The restaurant has established itself as one of the best dining destinations in the county. Auberge du Lac once saw Jean Christophe Novelli as Chef Patron and later earned a Michelin star.

Auberge du Lac enjoys an idyllic lakeside setting overlooking the beautiful 543 acre country estate and the Hall itself. Whether it is al fresco dining in summer at the water’s edge, or an intimate environment in the winter months, Auberge du Lac provides the right mood for every occasion and although no longer Michelin starred, the food is said to still be outstanding. 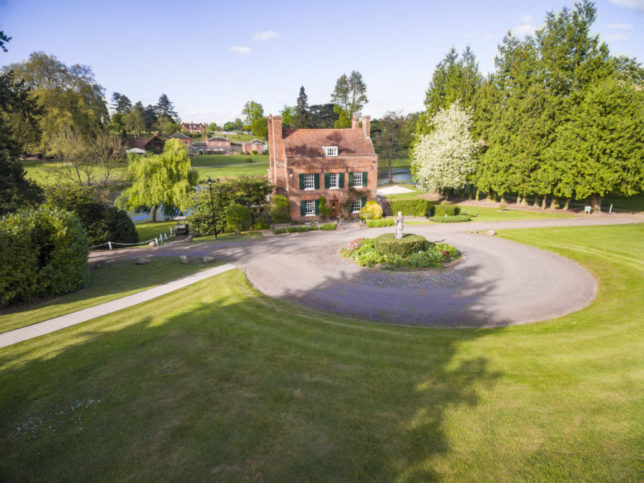 Recently landing the top job at the celebrated Auberge du Lac restaurant is Head Chef Matt Edmonds who was used to catering amongst the skyscrapers in London’s financial district as Head Chef of Searcy’s at The Gherkin.

Edmonds joined in February of 2017 and has already attained the accolade of two AA Rosettes in recognition of the superb food produced in his kitchen. Due to his passion for local fresh produce and foraging on the estate himself, his menus are bursting with the freshest of ingredients. 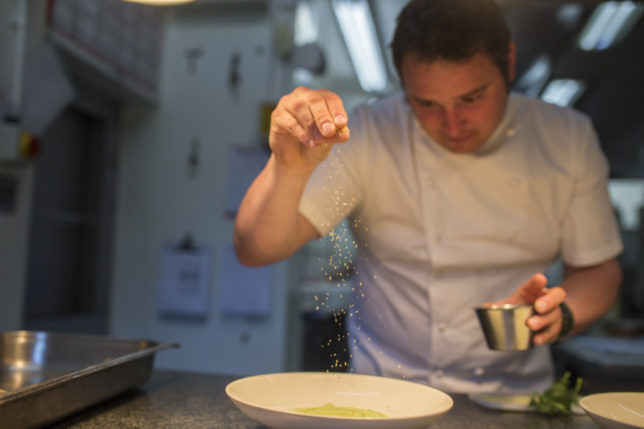 After being picked up from our room in Melbourne Lodge, we were whisked across Brocket Hall’s grounds to Auberge du Lac situated across the lake from the golf club with stunning views of the hall itself. The welcome was a very warm one as we made our way into the lounge and sat next to the open fire. As we settled in we chose a cocktail each including a classic Old Fashioned made with Makers Mark. This came with some light bites to tantalise the taste buds. 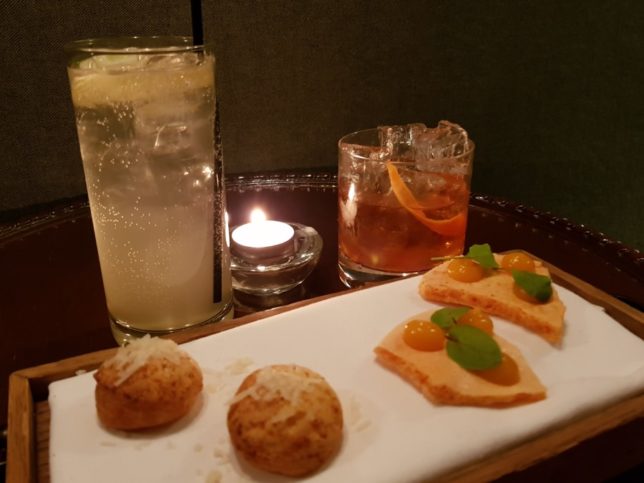 We were then invited into the conservatory where we had a stunning view of the lake. We started with the roasted cep risotto and slow cooked egg yolk. The creaminess of the dish brought out the subtle mushroom flavour and this a hearty dish was proportioned perfectly to start our culinary journey through Matt Edmonds’ menu. 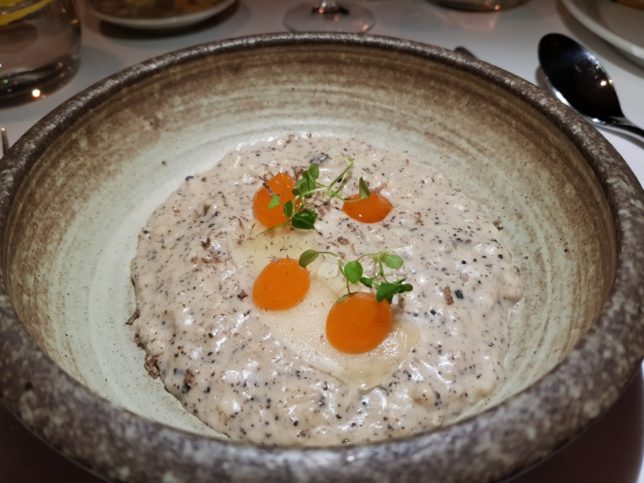 My dining companion had the heritage beetroot with goats curd, spiced granola and apple. This simple dish was fresh and earthy with the sweetness of the apple contrasting perfectly. 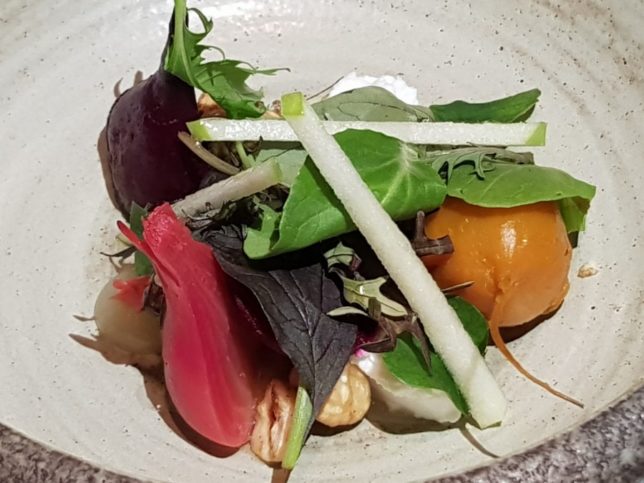 We were then surprised with an old favourite of Escargots Bourguignon. Chef Matt’s interpretation of this dish was skilfully put together. The meat from the escargots was complimented perfectly by the richness of the jus, the sweetness of the onion and the texture of the mushroom. 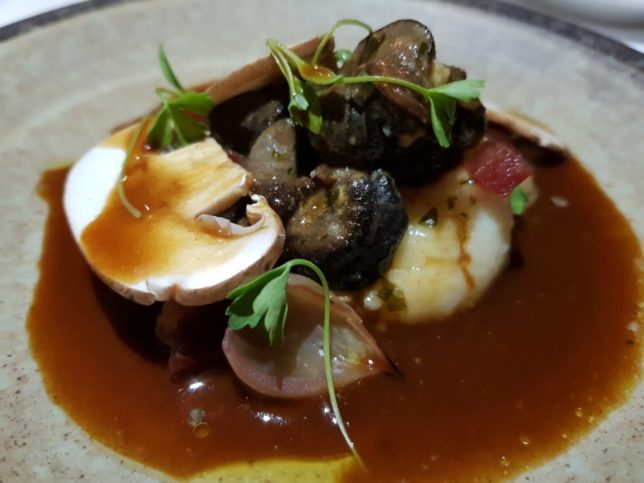 We continued our culinary journey with the Pan fried John Dory with celeriac, black garlic, crayfish. sea fennel and lemon. The delicate flakes of fish fell into perfect bite sized chunks and the flavours from the crayfish foam brought the dish to life. Every mouthful was an absolute pleasure. 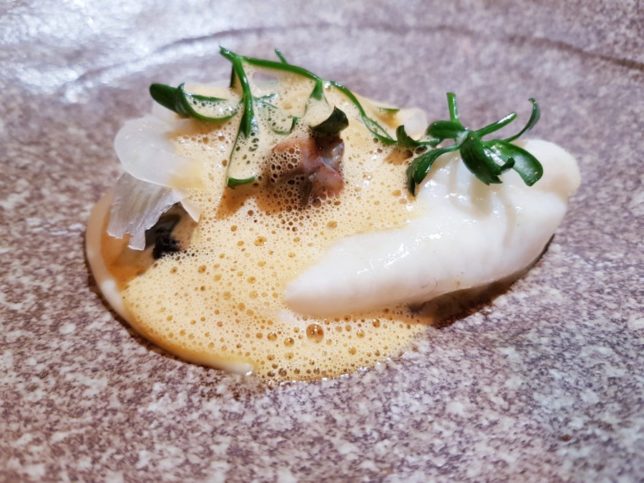 For the main course we returned to the land and tried hay ash Lakeland venison with truffle pomme anna, turnip and chanterelle. The venison was cooked medium rare and had an earthy taste. The dish worked well and is a must for venison lovers – sorry Bambi!

We then moved to Auberge’s take on the classic Waldorf salad which was small but full of flavour. 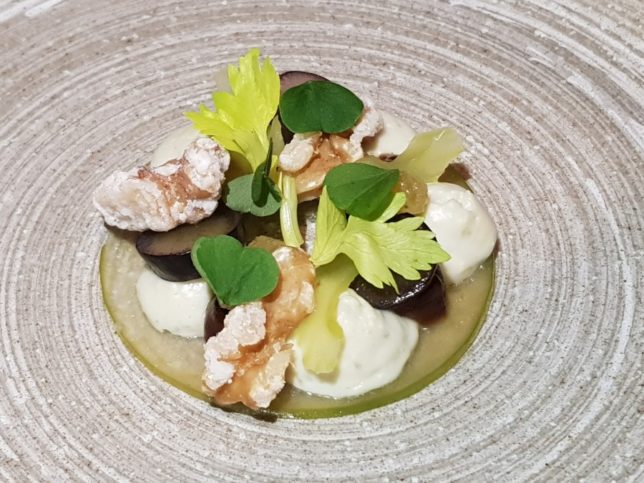 To finish l tried the Tiramisu which came beautifully presented quite unlike any other Italian dessert I has experienced before. 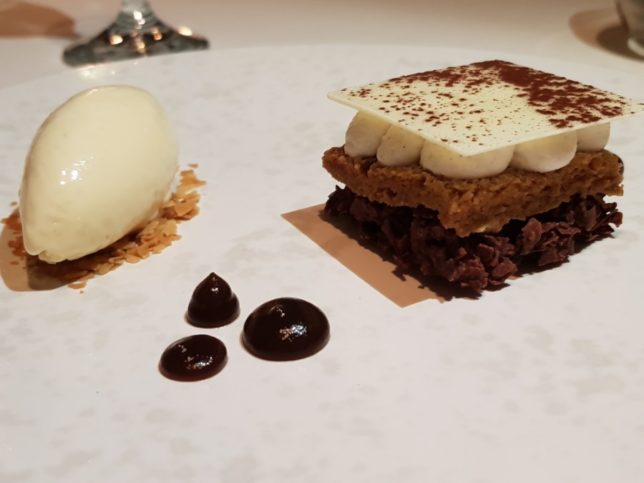 My dining companion had the Rhubarb trifle with lady finger, waina ginger cremeux, hibiscus poached rhubarb, chantilly and almond. This dish concluded a wonderfully executed menu which is a credit to the Chef Matt Edmonds and the Auberge du Lac team. 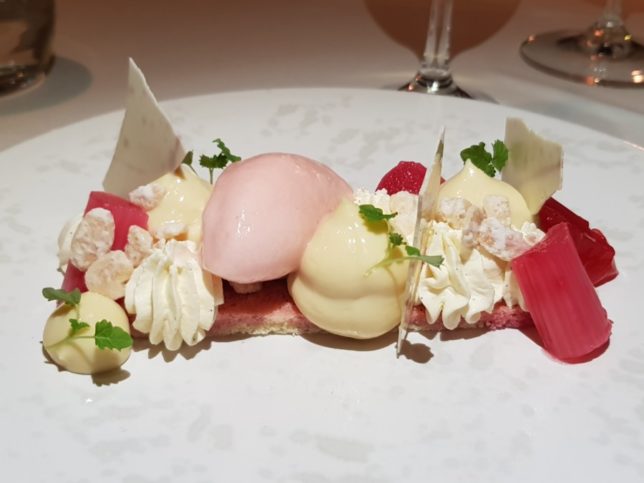 With a beautiful lounge, picturesque terrace and a host of tastefully decorated private dining rooms, capable of seating from 2 to 16 guests, Auberge du Lac regularly caters for private dinners, ladies lunches, weddings, birthday parties and other celebrations. Our celebration was a little more intimate but still made very special by the restaurant team. Happy birthday Mr Sloan! 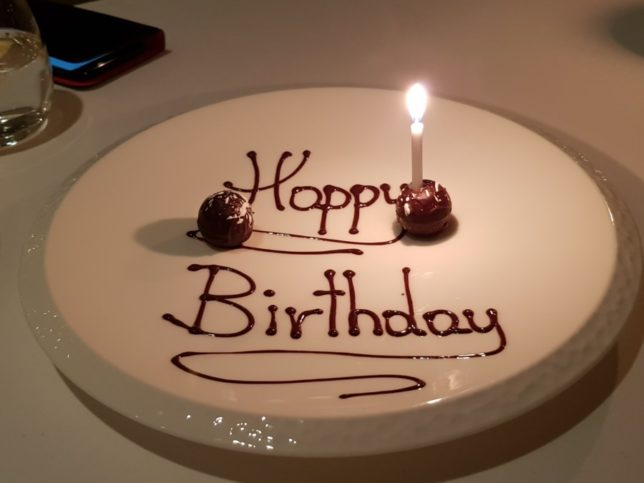