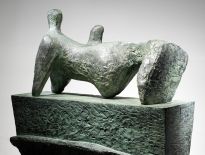 A major and monumental work by one of Britain’s greatest artists, Henry Moore (1898-1986), titled ‘Reclining Figure on a Pedestal’, estimated at £1m to £2m, will lead Bonhams sale of Modern British and Irish Art on 17 and 18 November in New Bond Street.

Casts of this highly acclaimed bronze have been exhibited on numerous occasions in Europe and the USA since its conception in 1959-60. The device of an integral pedestal had previously been used by Moore on a number of occasions. Works as early as ‘Reclining Figure’ (1929) are positioned on top of a pedestal of raw stone. The largest and most defined pedestal predating 1959 is the famous UNESCO ‘Reclining Figure,’ completed over the three years prior to ‘Reclining Figure on a Pedestal.’

The theme of the reclining nude obsessed Moore and played a central role in the development of his sculpture throughout his artistic career. He defined his own persona as an artist not so much by endless variety as by his ability to return to a familiar motif and make it new. In so doing, he felt that he renewed himself.

Moore commented on his fascination with the recumbent form: ‘I want to be quite free of having to find a ‘reason’ for doing the Reclining Figures, and freer still of having to find a ‘meaning’ for them. The vital thing for an artist is to have a subject that allows [him] to try out all kinds of formal ideas, things that he doesn’t yet know about for certain but wants to experiment with, as Cézanne did in his ‘Bathers’ series. In my case the reclining figure provides chances of that sort. The subject-matter is given. It’s settled for you, and you know it and like it, so that within it, within the subject that you’ve done a dozen times before, you are free to invent a completely new form-idea.’

Moore once pointed to the maternal element of his Reclining Figures, referring to both womanhood and Mother Earth. The horizontal configuration of ‘Reclining Figure on a Pedestal’ (1959-60) identifies the female form with undulating landscape and natural forms, in contrast to the Orientalist tradition of the recumbent nude. The cave and arch-like shapes produce a pushing and pulling effect, creating an organic rhythm within the work. Moore allowed these natural forms to evolve in his sculpture, often sourcing inspiration directly from nature in the form of shells, bones, rocks and stones.

Its status as a monumental piece of sculpture is greatly accentuated by the inclusion of the ‘pedestal’, which serves to raise the figure close to eye level with the viewer. The base is solid, three dimensional and yet in parts natural, with its bottom edge cleverly mirroring the arch forms of the underside of the figure it supports. This organic element is reinforced by the sculpture’s arresting patina, a beautiful mottled green, which recalls Moore’s attachment to the land.

Whilst the bronze is large in scale, Moore introduces exquisitely delicate touches to the surface, which brings to mind the human aspect of the piece. This is most obvious when looking at the sitter’s face: two small, perfectly incised hollows denote the eyes and a very shallow, curved incised line depicts the mouth, creating simple yet effective features.

‘Reclining Figure on a Pedestal’ is a sculpture which demonstrates an artist working at the height of his powers, one who is in total control of his medium. The importance and appeal of the work is apparent by its inclusion in three outstanding public art gallery permanent collections, on three different continents (South America, North America and Europe).

Matthew Bradbury, Director, comments: “‘Reclining Figure on a Pedestal’ belongs to a major U.K. Corporation and was acquired directly from the artist in the early 1960s. It is with great pride and excitement, therefore, Bonhams are presenting this important sculpture for sale at auction for the very first time.

The sculpture (estimate £1,000,000-2,000,000) will be exhibited at Bonhams in New York in October and early November alongside our Impressionist & Modern Art auction, prior to sale in mid November at Bonhams in London.”