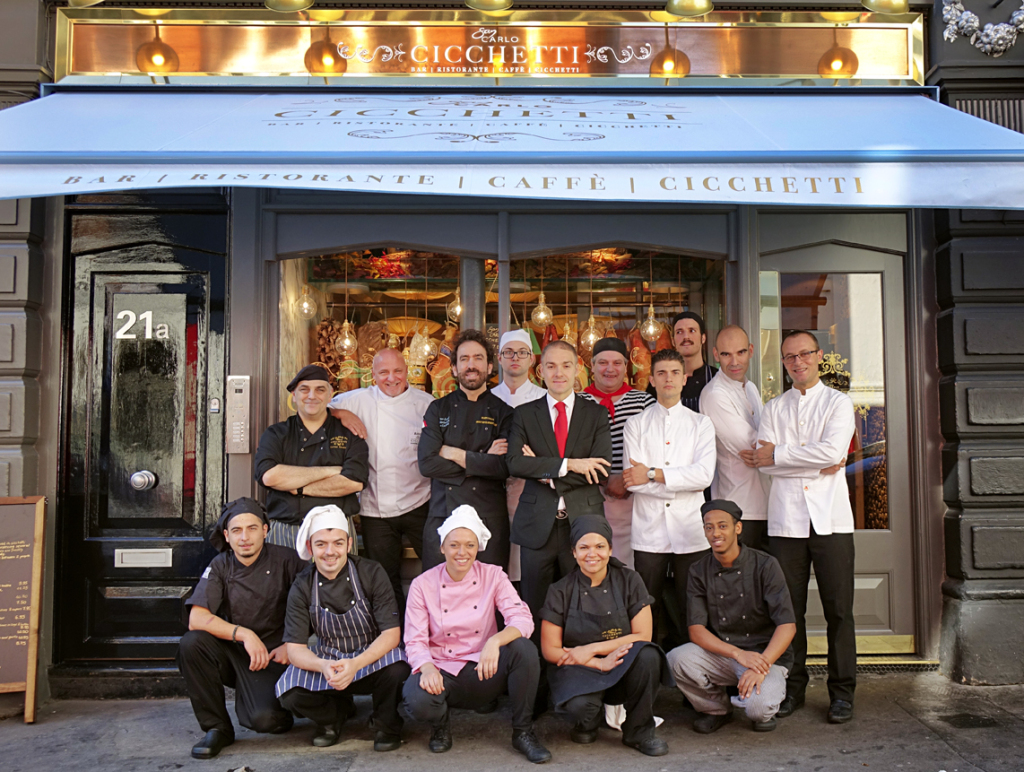 Following the huge success of Cicchetti, Manchester and London Piccadilly, The San Carlo Group of restaurants has opened Cicchetti, Covent Garden which brings the concept to theatre-land, with the help of celebrity chef Aldo Zilli in the kitchen.

The restaurant specialises in offering small plates of regionally sourced seasonal Italian cuisine. Much of the food is procured from the best producers in Italy such as Bottarga from Sardinia, Burrata from Naples, Culatello from Parma and of course Autumn white truffle from Alba. 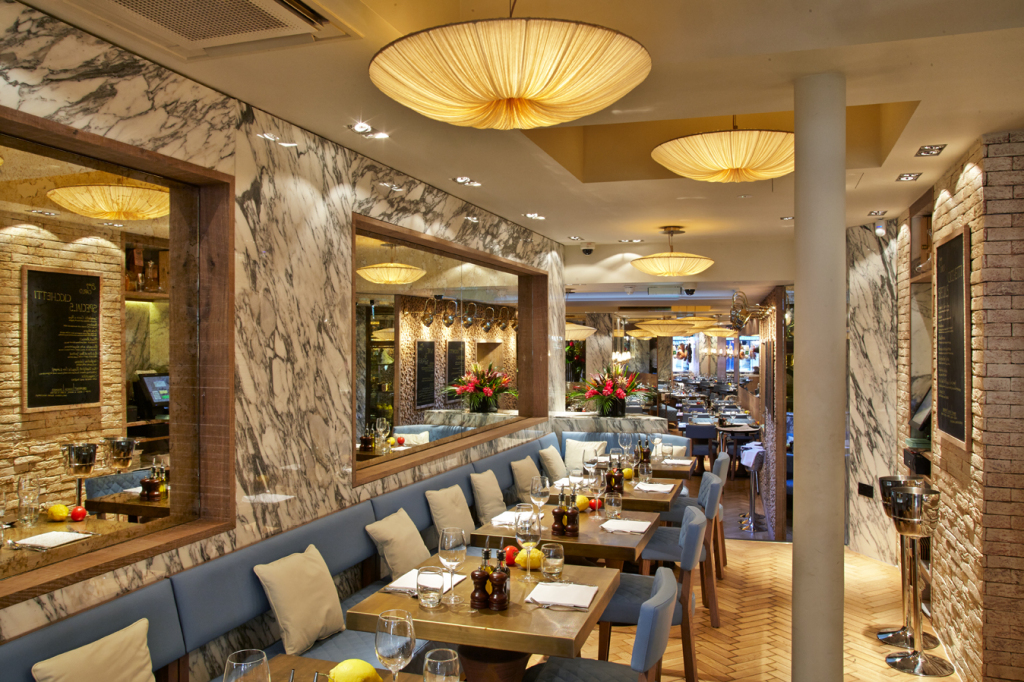 Owner Carlo Distefano prides himself in providing an authentic Italian experience across all of his restaurants; everything from the design, the staff to the wine list – which is expertly matched to the food with the majority being offered by the glass, has been conceived with the traditions of Italy in mind. 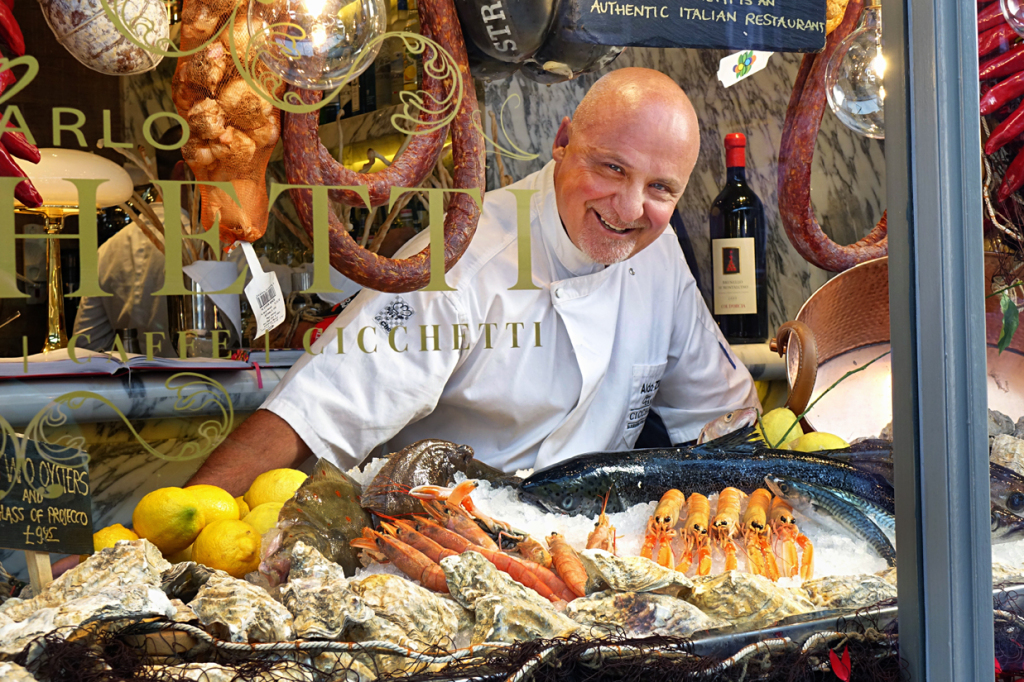 Celebrity Chef, Aldo Zilli, who is familiar with Covent Garden, having previously owned his own restaurants in the area, has collaborated with Cicchetti on the restaurant’s menu. Mr Zilli said: “I am extremely excited to be part of this new venture with the San Carlo Group as they always bring the best to the table. They have given me carte blanche on new menu creation and developing new dishes with the best that Italy has to offer in season.”

On arrival at Cicchetti Covent Garden, you are welcomed not only with a warm friendly buzzy vibe, but also there is an ambient warmth of character and temperature much appreciated as the winter draws in. We were immediately set at ease while our host explained the concept that the food is served in a style very similar to tapas which originates in Venice where small plates of food are served called cicchetti. It was suggested that we order 2-3 dishes per person and share. While we were perusing the most delectable Italian menu we have seen for some time, we were offered a beautiful rosemary infused flatbread to whet our appetite. The bread’s gigantic proportions hit the spot perfectly and surprisingly did not ruin our appetite but made our mouths water for the main event.

The wine list is singularly Italian however there is enough choice to satisfy the most defined of palettes. The waiters were trained with the finesse to make you feel comfortable but also allow you to have privacy as and when needed. Everything from the presentation, to the pouring and even the help choosing wine was second to none. No attention to detail was spared and this was the prelude to an evening of luxury and elegance.

After ordering our dishes for the evening the Queen Scallops arrived first. Not only were they super sized, the texture was soft and they were cooked to perfection.  They were lightly coated in breadcrumbs and an explosion of flavour culminated in the mouth on first bite.

The Pork Belly and Black Ravioli were the next two dishes to arrive. The pork was crispy on the outside and succulent inside. It was accompanied with baked potato and lashings of parmesan.

The Black Ravioli was an interesting dish. Slightly overwhelmed by the tomato sauce, but easily adapted by taking as little or as much as you like. A nice surprise in the rich but creamy tomato sauce is the shrimp which adds another dimension to the dish.

We enjoyed the style and speed of dishes arriving as and when prepared. Their delivery was executed with excellence by the kitchen and the waiters never left us waiting too long nor did we feel overwhelmed with the food appearing too fast. The plates are changed efficiently to avoid mixing flavours that are not meant to be together.

The Fritto Portofino was a beautifully presented dish. The prawns, scallops and calamari arrived lightly battered and succulent. The prawns and scallops were a very generous size and were accompanied with garlic aioli and spicy Calabrian dips.

The Pigeon Breast Pate with Black Truffle was served perfectly chilled. It was smooth, creamy and had a distinct taste of truffle to complement the distinct game flavour. The only downside was the bread; to me it was slightly tough but not enough to dissuade me from having another bite.

The Crab Gnocchetti was by far my favourite dish not of just the evening but of every Italian restaurant I have been too. Having often travelled to Italy this was quite the surprise. A new dish to their menu, my senses were delighted, the emotion of comfort is elicited and it is a pure bite of heaven.

After the excitement of the main course we eagerly anticipated the dessert menu with what room we had left. We went for the Dolci Cicchetti, a selection of bite-sized desserts which included Torta Pistacchio, Seven Layer Cake, Panna Cotta and Thousand Layer Cake. We were also lucky enough to try the restaurant’s homemade hazelnut ice-cream which had a beautiful creamy nutty taste, enough to satisfy any die hard gelati fan. Each dessert was tastier than the one before it and the presentation had typical Italian flair. My personal favourite was the pistachio mousse cake. With many pistachio desserts it can be hit and miss but this dessert did not disappoint and was a definite hit.

Cicchetti has it all, with food like this expect the waiting list for a table to be high, get in while you can and sample the finest delights of Italy that London has to offer.

Cicchetti Covent Garden is open from breakfast to midnight, 7 days a week, 365 days a year to accommodate the customers’ every need. The fully stocked bar will offer an impressive wine list with an array of different prosecco cocktails to enjoy any time of the day.