The Lexus RX has proved hugely popular since its 1998 launch with people who want the flexibility of an SUV with the comfort of a premium-quality saloon, all contained in an attractive and stylish package. The new RX sustains this successful formula while making a leap forward in design. Its mixture of sharp creases and curves links it to the contemporary styling displayed by other recently launched Lexus models. British actor Jude Law is the ambassador for the Lexus RX. Here’s just one of the shots from the 2015 campaign. 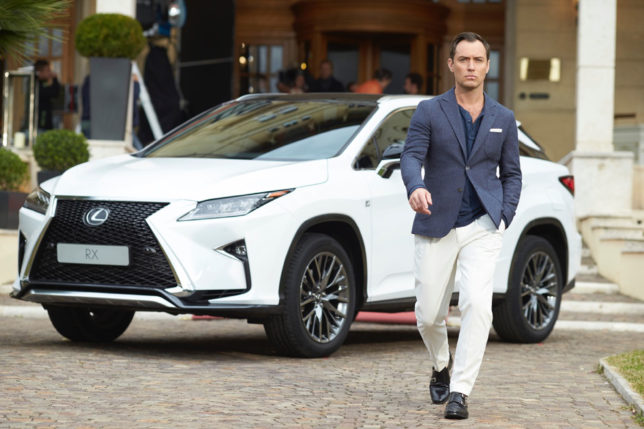 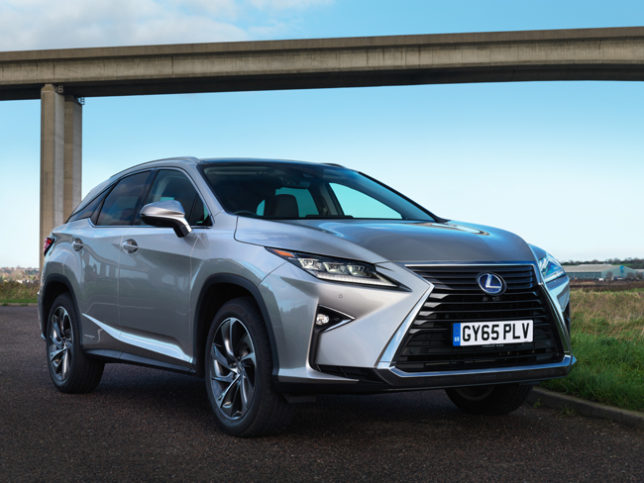 We were delighted to have a test drive of the Lexus for a recent trip to the Cotswolds.  It has a stylish, elegant and modern exterior. Lexus’s mission was to create a stronger and more athletic body style and improve cabin ergonomics, while preserving the RX’s established luxurious character. They certainly have achieved this. The external creases and curves capture the design language that’s evident in the sheet metal treatment of other recent Lexus models, such as the IS, NX and RC. Sadly as my lady states, it doesn’t come with Jude himself, however they both do look as stylish as each other and belong on the red carpet. 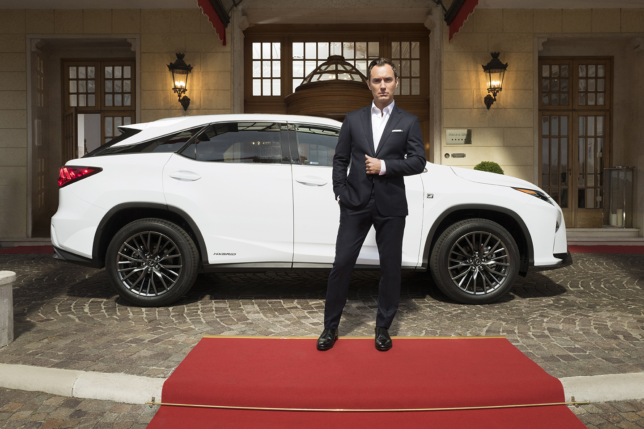 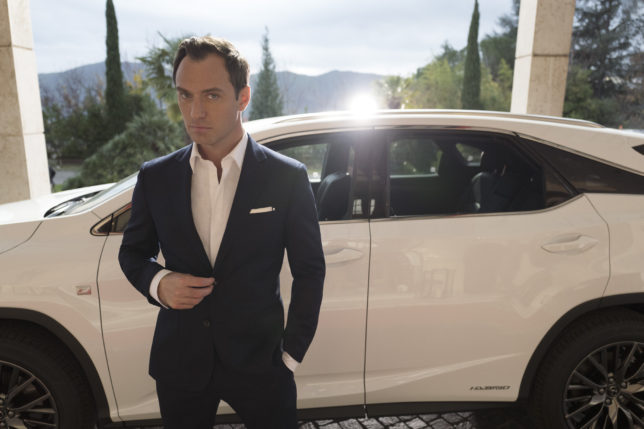 The drive is smooth, efficient and comfortable. Gliding along the M4 was a dream and made a long journey very pleasant. 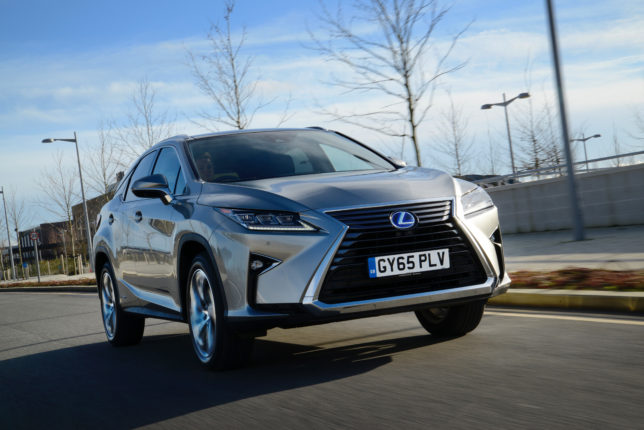 The driver and front passenger seats sit 19mm lower than in the previous RX, allowing for excellent headroom. The steering wheel has been repositioned, with steering column angle reduced by two degrees and the wheel set closer to the driver. This makes for a comfortable and more involving driving position. 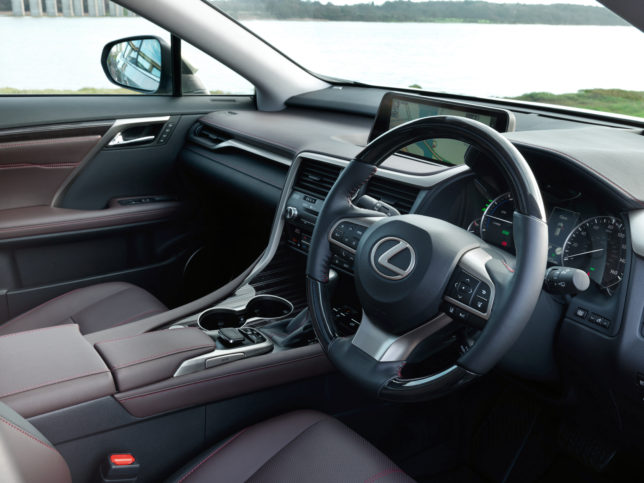 Lexus has paid special attention to the comfort of rear seat passengers, and by lowering the rear floor section has produced a seating position that bears comparison with the LS limousine. There is plenty of headroom – as before – together with more legroom, thanks to the increase in the car’s wheelbase. The three rear seats have an increased angle of recline and cushion slide adjustment (in a 60:40 split configuration). The seats are easy to fold when more load space is required, using levers by the side of the seats or in the luggage area.

The cargo space hasn’t been compromised by the changes to the rear of the cabin and provides enough room for four large suitcases or multiple golf bags. A space saver spare wheel and jack are provided as standard, stored in an area beneath the boot floor.

The new RX is the first Lexus to offer the convenience of a smart power tailgate (standard on Luxury grade and above). If you are carrying bags or luggage, there’s no need to fumble for your key fob or reach for the tailgate release button to open up the boot. Instead, you can just place your hand over the Lexus emblem on the tailgate to operate the mechanism – you don’t even have to touch it.

A sensor recognises the key fob in your pocket or bag and your presence at the rear of the vehicle to open the tailgate. The system will work even if you are wearing gloves, and with an elbow motion if both your hands are full.

After a little break we popped down to the butterfly park… You really do notice that the new-look instrument panel incorporates the world’s largest colour head-up display (standard on Premier grade) which projects key information and data at the base of the windscreen in the driver’s eyeline. For the first time the range of data includes adaptive cruise control status, speed limits and pedestrian and Pre-Crash Safety warnings. 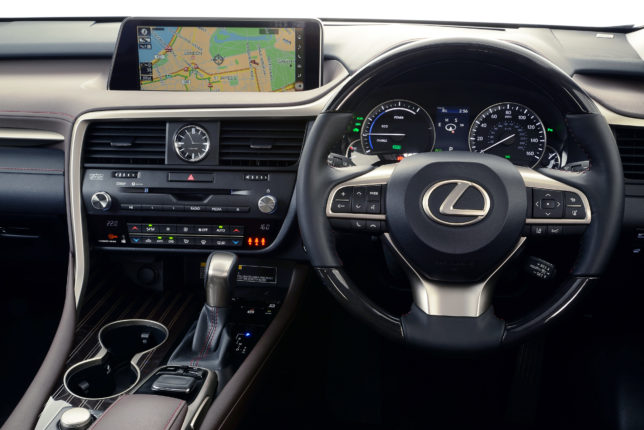 Models equipped with Lexus Premium Navigation benefit from a central 12.3-inch dashboard monitor (an eight-inch monitor is featured on other versions), designed for ease of use and high visibility, whether scrolling through function menu screens, using maps or accessing the RX’s multimedia and audio systems.

Looking out the window I spied this beauty… 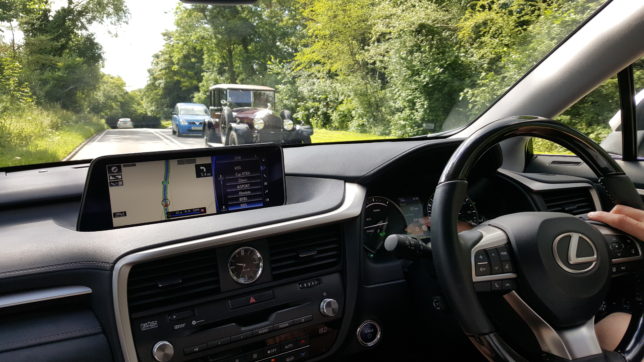 A classic car has it’s place but the new RX provides a wider field of vision through the windscreen and over the bonnet. This improves safety and also helps the driver gain a better sense of the vehicle’s width when manoeuvring into parking spaces. Better visibility has also been obtained by repositioning the door mirrors, which sit slightly further back, reducing the blind spot. The front pillars have also been made thinner, giving a cleaner, more minimalist appearance. Allowing you to just enjoy the view and the drive. 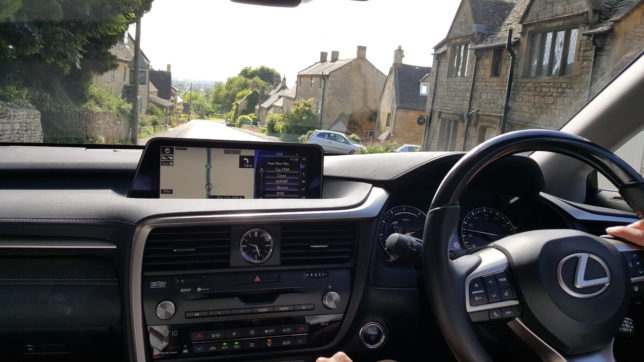 For those of you who want to get under the hood, I love this representation of the car. 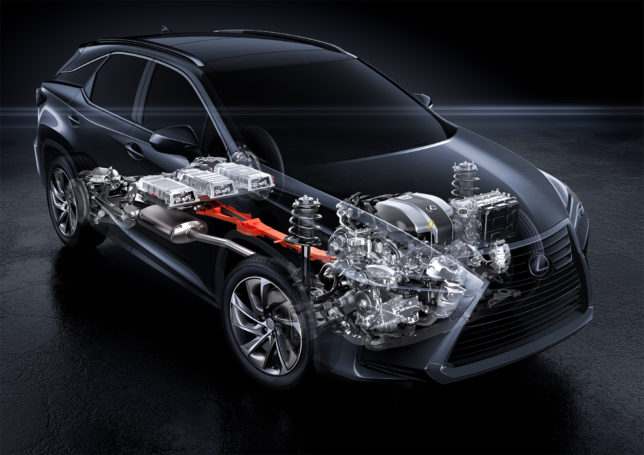 Combined cycle fuel economy is 54.3mpg for the SE model and 51.4mpg for other grades; respective CO2 emissions levels are 120 and 127g/km (VED bands C and D).

In a first for a Lexus hybrid vehicle, the new RX has a sound generator system that creates a performance-style intake sound. It uses air intake pulses to raise the sound pressure level across three resonance frequencies to heighten the sense of performance. The engine has new-shape intake ports and combustion chambers that generate a high degree of tumble inside the cylinders, improving combustion performance.

This powertrain represents the latest and most advanced iteration of the Lexus Hybrid Drive system. Its key components and control systems have been improved and re-engineered to deliver better fuel economy, lower emissions and better on-road performance.

The transmission features a hybrid front transaxle with a new, water-cooled transmission oil cooler. There is also a pre-loaded differential that supports better performance and straight line stability. The E-Four all-wheel drive system uses an additional electric motor in the rear transaxle, which has a reduction drive, a three-shaft configuration and a weight-saving aluminium case and cover. The E-Four system’s control functions have been improved to give better response when accelerating through bends.

But forgetting the technical stuff for another minute, it is just super stylish. There is Jude copying me matching his blazer to the car… good man – well played! 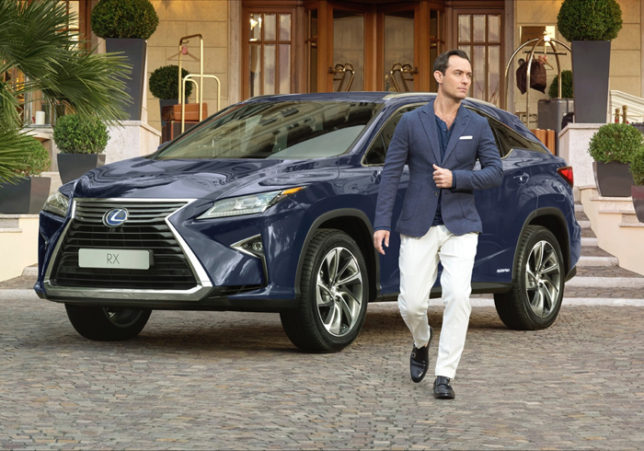 Stylish and safe, the new RX is equipped with Lexus Safety System +, a multi-feature, integrated safety package that delivers exceptional levels of active safety and driver assistance to help prevent accidents happening. Not only does Lexus provide the most comprehensive active safety provisions in the premium SUV market, it does so at a price that is significantly lower than that of rival systems.

At the heart of the Lexus Safety System + is the Pre-Crash Safety system with Pre-Crash Brake Assist. This uses a front-mounted camera and millimetre-wave radar to detect vehicles and pedestrians on the road ahead. If it calculates a risk of a collision, it automatically warns the driver and the Pre-Crash Brake Assist engages to provide extra braking force the moment the brake pedal is pressed. If the driver fails to react and the system judges a collision to be imminent, the brakes are automatically applied to reduce vehicle speed and the force of any impact.

The same radar unit is used to provide Adaptive Cruise Control, which helps the driver maintain a safe distance from the vehicle in front, even at very low speeds. Once the way ahead is clear, the RX automatically accelerates to its pre-set cruising speed.

The package also includes Lane Departure Alert (LDA) and Lane-Keeping Assist (LKA), which recognise when the new RX is deviating from its lane on the highway and help the driver steer the vehicle safely back to its correct path. Lane Departure Alert uses a camera on the windscreen to track the vehicle’s course between lane markings painted on the road surface. If it judges that the new RX is about to move out of its lane without the turn indicator being used, the system lights up a warning on the multi-information display and vibrates the steering wheel. It will also apply appropriate steering control force to help bring the vehicle back on course. 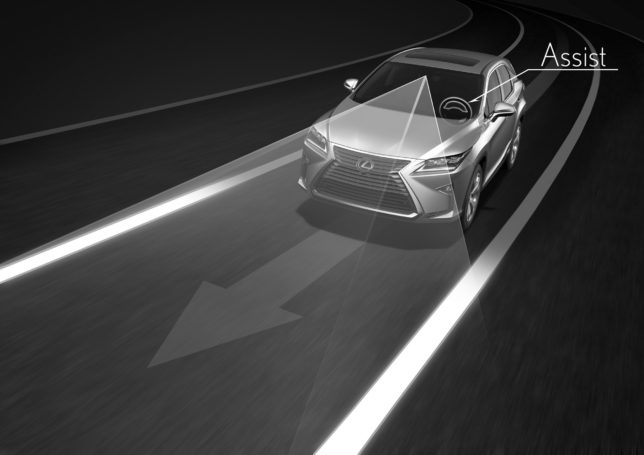 Lane-Keeping Assist provides an extra layer of assistance, automatically providing steering inputs to keep the car safely within its lane, notably when the Adaptive Cruise Control is being used. In a first for a Lexus, Lane-Keeping Assist can be used even at very low speed, when the Adaptive Cruise Control is operating. The driver can also choose which alert they prefer (warning sound or vibrating steering wheel) and the sensitivity of the warning, via the multi-information display. The system can also be switched off, if desired.

Lexus Safety System + further includes Automatic High Beam, which detects oncoming traffic and vehicles ahead and automatically switches the headlights between high and low beam. The flagship Premier models feature the Adaptive High-beam System, which gives even better illumination by adjusting light distribution to avoid dazzling other road users, instead of switching the headlights to low beam.

The driver also gains a “second set of eyes” when it comes to important road signs on motorways and major routes. The Traffic Sign Recognition system uses a front camera to recognise principal warning and command signs, which are then replicated on the multi-information and head-up displays, reducing the risk of the driver not being aware of speed limits, lane closures and other important information. 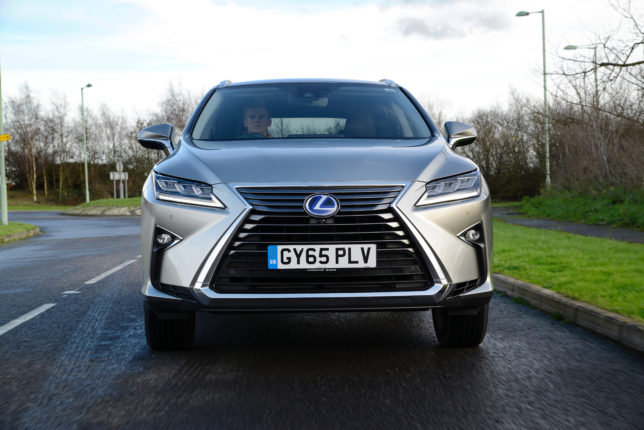 I could go on as I love cars but I’ll let the pictures speak for themselves. 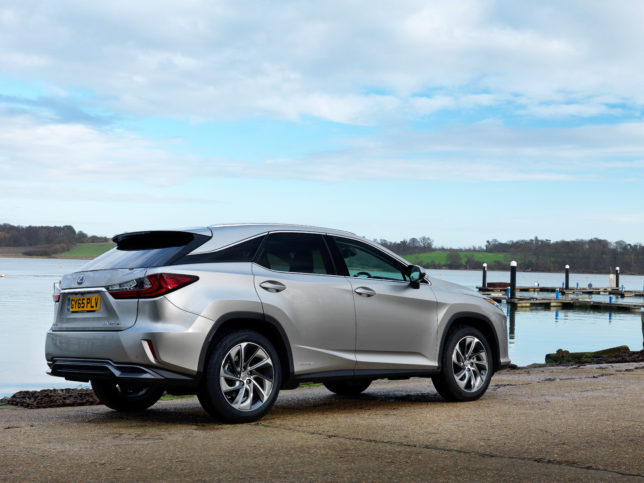 It looks great wherever you are… 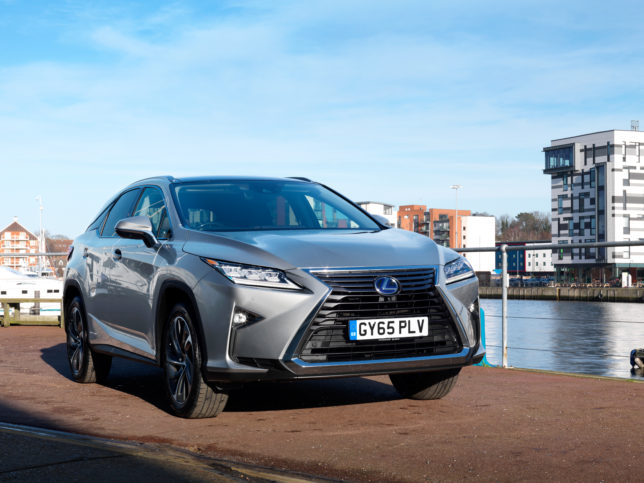 Take her to the water… 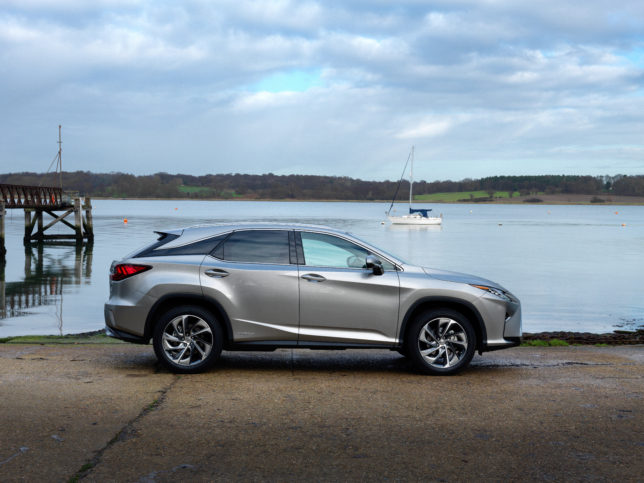 Or drive her up to a luxurious hotel. She fits in wherever she goes. 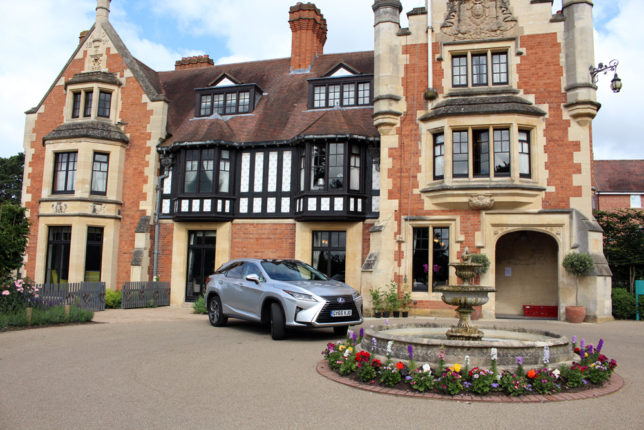 And no one minds if you park right outside the front door! 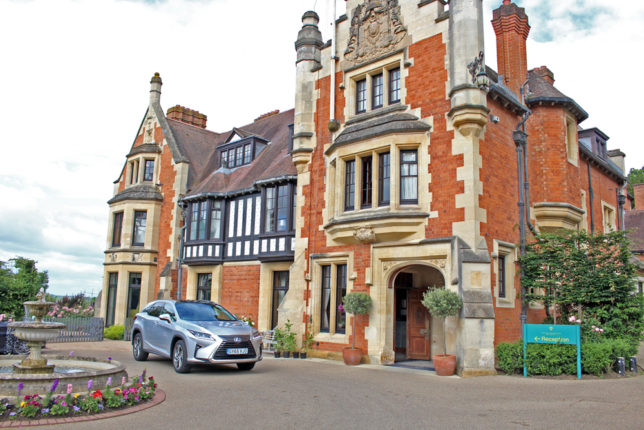