SLOAN! Magazine is pleased to announce that Henley Festival, the UK’s most glamorous boutique festival, and winner of Headline Performance of the Year at the 2016 Festival awards, returns to its spectacular setting on the riverbank in Henley-on-Thames from 5th – 9th July 2017. 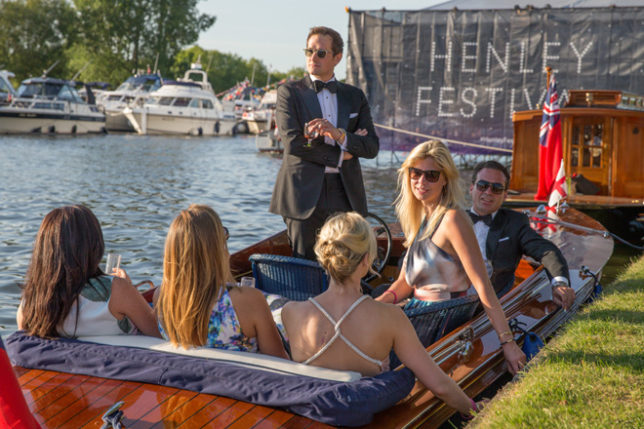 Grammy-award-winning singer-songwriter Jess Glynne will open the 2017 Festival, performing her string of number one hits including “Hold My Hand” and “Don’t Be So Hard on Yourself” on the iconic floating stage on Wednesday 5th July.

On the second evening of the black-tie festival, the most successful duo in UK music history, with three Brit Award wins and six Grammy nominations to their name, the Pet Shop Boys, will take to the stage with their acclaimed Super Tour show.

While on Saturday night, Goldie, the father of UK Drum and Bass will present an orchestral version of his ground-breaking 1995 Album Timeless, performed by The Heritage Orchestra, who bring their classic reworking of one of the most influential albums of the last 20 years to Henley’s stunning riverbank.

On the final night, world-conquering ‘90s girl group sensation, and one of the most successful girl bands of all time, All Saints will bring the Festival to an unforgettable close – Team SLOAN! will be there on the night soaking up the atmosphere and dancing away to our favourite All Saints tunes like no-one is watching!

PizzaExpress Live will be getting things started on the Floating Stage with early-evening performances each night of the Festival. ‘King of Soul’ Geno Washington and the Ram Jam Band will perform on Wednesday.

Thursday sees American pop/rock singer Vonda Shepard return to the UK following her highly successful 2015/16 tour. We’ve loved Vonda ever since the first time hearing her sing the theme tune to Ally McBeal. Do you remember the dancing baby or are we just showing our age?!

On Friday night, the high-energy Soul/R’n’B group, The Staxs Band, featuring musicians who, between them, have performed with some of the biggest names in music will take to the stage. On Saturday night, British Jamaican R&B and soul singer-songwriter, Ruby Turner – who was recently awarded an MBE for services to music – will delight festival-goers.

The 2017 comedy line-up is set to be bigger and better than ever, with the likes of Andy Parsons, Seann Walsh, Sara Pascoe, Mark Dolan, Russell Kane, Matt Forde, Mitch Benn and Paul Sinha among the biggest names of the 25 comedians performing at this year’s Festival.

A festival for food lovers, Henley caters for all tastes offering a huge number of restaurants and pop ups from street food to fine dining. Restaurant’s popping up at the festival will include The Spice Merchant and The Dog & Badger alongside street food from Jimmy Garcia’s BBQ club, Newquay Sushi, Snob Lobster and Champagne, Pizza Express and Awesome Crispy Squid. Henley will once again host the UK’s largest pop-up restaurant, with catering maestros The Dish serving 800 covers a night at the atmospheric Riverside Restaurant.

Returning in 2017, legendary jazz club Ronnie Scott’s will be making the festival its home for the full five days. Festival goers will be treated to the full Ronnie Scott’s experience, seated at cabaret-style tables they will be able to watch performances by the stellar Ronnie Scott’s All Stars while waiters discretely serve cocktails and show-stopping food from Caper & Berry.

For a relaxed vibe, sumptuous surroundings and easy listening music, festival-goers can head to the Bedouin tent throughout the evening each night. The 2017 line-up includes a range of up and coming local talent including:

Legendary nightclub Heaven will be bringing their sister club Pure to the festival, kicking off the dancing each night as soon as the headline act finishes on the floating stage.

#daytonight is the visual arts theme, culminating each evening with a ‘moment’ where art in the day transitions to art at night and the whole Festival site becomes part of the installation using fire and light.

An all new line-up of weird and wonderful street performers will be roaming the Festival again this year. From the surreal to the sublime, the troupe of roving street entertainers will include street art and theatre, musicians, and cabaret acts. From walking works of art La Galerie Mobile, to moustachioed muscle men on ‘Beach Patrol’, and from a life-sized, fire-breathing, horse robot, to a human red carpet, the bewitching troupe of street performers will interact with guests offering them delights, surprises, and mesmerising performances throughout the festival.

Not just for grownups, Sunday at Henley festival is Family Day, with a fantastic line-up for kids and families. Young visitors can enjoy and interact with outdoor theatre in a greenhouse, with The Little Gardener; comedy from Britain’s Got Talent contestant Bruce Airhead; and a mini musical adventure with Tommy Foggo – Superhero, as well as much more, while parents can relax in the stunning festival grounds.

Henley Festival is a not for profit organisation and as well as supporting a number of local charities, it has a three-year partnership with The Children’s Society to bring inspiration and vital support to thousands of children who care for their parents and family members. The Children’s Society is a national charity that runs local services, helping children and young people when they are at their most vulnerable, and have nowhere left to turn. They also campaign for changes to laws affecting children and young people, to stop the mistakes of the past being repeated in the future. Their supporters around the country fund their services and join their campaigns to show children and young people they are on their side.

Tickets start from £45 and are available from www.henley-festival.co.uk