BY ROB SYMES – Co-Founder and CEO of The Outside View

In 1909 at the ‘dead end’ of Oxford Street, thirty police officers were needed to restrain 150,000 people trying to enter to a new type of retail store: Selfridges. Harry Gordon Selfridge, the master of publicity, had scored a momentous coup, Louis Bleriot and his aeroplane, the first man and machine to fly over water. Selfridges had established the theatre of retail and from then on, if there was an new and exciting trend, Selfridges would showcase it first. Customers came for the razzmatazz, the show, the hustle and bustle. In short, they came to discover never before seen things from never before seen places.

Yet, from Oxford Street to Upper Street, from City Road to the King’s Road there is a drabness and dullness to the estate agents shops that dominate our high street. In fact, shops before Harry Selfridge came along and demonstrated the same uniformity that we see today from estate agents. Selfridges differentiation wasn’t just a shop window but the experience a customer had once inside the shop. Actually, once estate agents understand that their uniformity (same location, same computers, same haircut) is a negative they actually have an opportunity to pull off a Selfridge-sized coup.

In property, the last ten years have been defined by Rightmove and Zoopla connecting estate agents with buyers. Less face-to face, more choose and click. Like many middlemen before them estate agents have been squeezed by the internet. Yet, instead of huddling together on the high street hoping that strength in numbers will keep them afloat, estate agents should acknowledge one simple fact: Houses are not books. They are not clothes. They are not computers. Houses are not commodities. They are homes, where we live our lives, where our kids grow up and we grow old. Where families come together, eat together, love, live and fight together. A home is the most expensive purchase most of us make and by its nature therefore deeply personal.

Estate agents have misunderstood technology’s potential to mean their destruction at the hand of technology. Sure, it is easier for buyers to find houses on portals. And now, estate agents can use algorithms to predict which people are most likely to move house which drastically decreases their marketing budgets. But computers and humans are good at fundamentally different things. Machines can search through hundreds of people, but only a person can persuade the right one to buy a house. A machine can cross an ocean, but only a human can imagine putting that machine in a retail store.

Estate agents are sitting on the greatest asset on the high street: Location. Yet location is nothing without imagination. Estate agents must draw buyers and sellers alike to experience things they never thought possible whether they be future design, houses or aeroplanes. A little razzmatazz goes a long way. And by putting on a show, maybe they’ll make as much of a splash as ‘mile-a-minute’ Harry Gordon Selfridge. 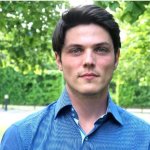 Co-Founder and CEO of The Outside View, Rob Symes is a serial entrepreneur whose transatlantic documentary featuring Nobel Prize Winner Daniel Kahneman launched the company. He is passionate about bringing data driven decisions to businesses that haven’t fully embraced the potential of analytics. Focused on the Property sector, he has quickly won a number of blue chips customers like Knight Frank, Carter Jonas and Faron Sutaria (part of Countrywide).