As part of his acclaimed world tour, Sting will be performing here in London next month at two headline shows in addition to another tour date in Manchester as part of his ’57TH & 9TH TOUR’ in celebration of the new album released via Polydor Records last November.

The 57th & 9th album represents a wide range of Sting’s musical and songwriting styles, from the rocky “Petrol Head,” and melodic “50,000” to guitar-driven first single, “I Can’t Stop Thinking About You”. The themes of travel and motion which inform much of the record are most apparent on songs such as “Inshallah” and the autobiographical “Heading South On The Great North Road.” 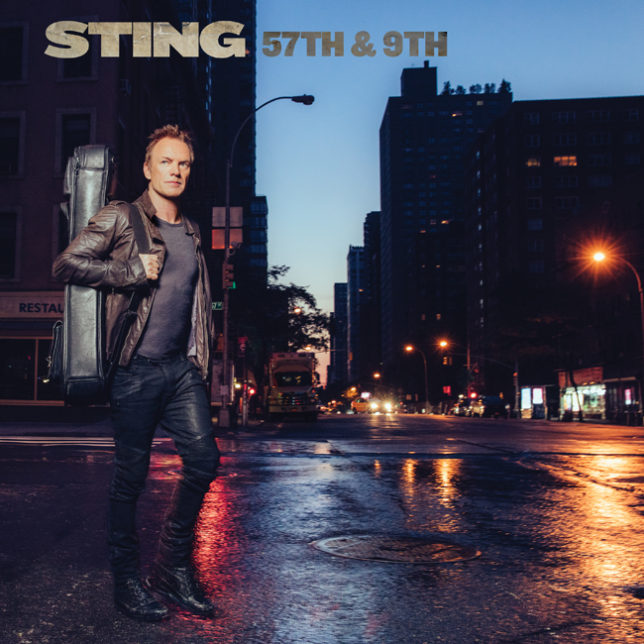 50,000 is the latest track from Sting’s album 57th & 9th. The album, produced by Martin Kierszenbaum, takes its title from the Manhattan crossroads en route to the studios in Hell’s Kitchen where the recordings were done over a three week period this summer.

The song explores themes of mortality with Sting saying: “50,000 was really a response to the passing of a lot of cultural icons this year. Prince, David Bowie, Glenn Frey, Lemmy, as well as Alan Rickman. It’s really about how surprised we all are when one of our icons passes away because we’ve invested them with immortality, in a way… So when they die, it really brings our own mortality into sharp focus.”

The 57TH & 9TH TOUR opened in Vancouver in February with the Vancouver Sun describing the “stripped down, hit laden set” as “a treat for fans”. The tour will reach the U.K for shows at Manchester’s O2 Apollo on 7th April, as well as two shows at London’s Eventim Apollo in Hammersmith on 9th and 10th April. Tickets sold out quickly as fans grabbed their places as early as November last year to be part of this highly anticipated musical experience.

The tour sees Sting joined by a 3-piece band consisting of including Dominic Miller (guitar), Josh Freese (drums) and Rufus Miller (guitar).  Sting is also joined by special guests include singer/songwriter Joe Sumner as well as San Antonio-based band, The Last Bandoleros. Full tour itinerary of the world tour can be found at www.sting.com.

The June edition of SLOAN! will feature a Q&A with Sting as he chats about his latest tour and the new album. Follow us on Twitter and Instagram @sloanloves to be the first to read the interview as soon as it’s published.