For centuries now, the refined art of whisky drinking throws its share of diverse and conflicted opinions. On the rocks? Not on the rocks? Even the most seasoned whisky connoisseur can be flummoxed! We asked Pernod Ricard brand ambassador Lauren Mustard to venture into the Highlands and debunk the six tallest tales from the north.

Myth one: Water in whisky

“The way to drink whisky is to drink it how you like it best. You will often hear murmurs about adding water to whisky, with the traditional perception that either it is a sin or that it opens up the whisky, unlocking the aromas. When asked, I would suggest trying it neat first and if you find it to be too strong then add water. As the water and alcohol combine, an exothermic reaction takes place, opening up the whisky and releasing the more volatile aromas allowing you to fully appreciate it. I come from a traditional Scottish family and from as young age I remember my Grandfathers always adding a splash of water. For me, it totally depends on the whisky. For example I enjoy a Chivas Regal 18 neat, where as I always add a dash of water when I drink Aberlour 12. Also, drinking water beforehand will act as a cleanser and neutralise your canvas.

Myth two: Tasting is most important

“Although our mouths unlock the appreciation for texture, temperature and taste, they are limited to sweet, sour and salty. Our nose, however, has many more sense receptors and detects thousands of different smells, with the brain scrabbling to associate a word or nostalgic occasion to match the nose’s experience. For this reason, you should start by nosing your whisky before tasting it, giving you a preview of what’s to come.”

“If I had a penny for every time I have been asked this question… If you like ice in your whisky, by all means add ice. My thoughts on this are that ice is so cold, it can retain the aromas. However, during the summer months when you want something cool and refreshing, adding ice to your whisky will achieve that- it all depends on what you’re looking for from the whisky.” 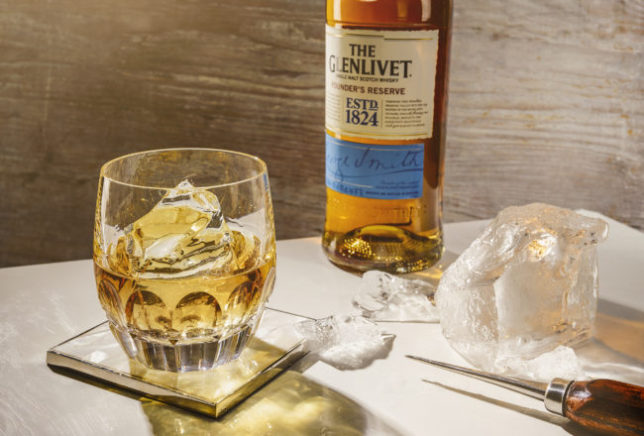 “Blending a whisky is a form of art and after having spent some time with Colin Scott, learning from the Master Blender of Chivas Regal himself, is something I find fascinating. Just like single malts, you get different qualities of blended whiskies. Blended whisky is made with grain whisky as well as single malts. Grain whisky should be smooth and creamy and when aged then combined with high quality aged single malts, results in an excellent blended whisky. Something that needs to be remembered is the amount of time it takes to create some of the age-statement blended whiskies, not only do you need an aged grain component, but you also need all of the other single malts in the blend to have been aged for a significant amount of time too. Take the Chivas Regal 18, as an example: the heart of the Chivas Regal 18 year old blend is Strathisla and there is a high percentage of Longmorn too, but there are other single malts from other whisky producing regions in the blend that have had to lie in oak casks for a minimum of 18 years before they can even be considered let alone blended.”

Myth five: The older the whisky the better it is

“Older generally means more expensive, and people seem to be under the perception that if it’s more expensive – it must be better. It depends on your taste as whisky is entirely subjective. One person might find a 6 year old whisky to be their favourite, whilst the next person may prefer a 25 year old whisky. Every whisky is different, which is the beauty of it! When I started working in the industry I wasn’t overly enthusiastic about drinking whisky. The first one I ever tried was one that my father drank which I thought was okay but didn’t have the desire to drink again. Working at a distillery quickly changed that as I was exposed to many different types of whiskies; different ages, different cask types, different ABVs, and I realised that I did in fact like whisky, and a variety of whiskies at that! Fast forward a few years and I work with the liquid sunshine daily.”

“Many people’s initial perception of Scotch whisky is that it is an (older) gentleman’s game. Not anymore! Female whisky drinkers, female bartenders and female whisky ambassadors are growing in our numbers, and the classic expectation of a man, in a traditional Scottish tweed jacket with a moustache is becoming less and less!”

Don’t forget to check out Spirit Notes in each edition of SLOAN! Magazine where we feature some of the best whiskies available and look out for our review of The Glenlivet Founder’s Reserve coming soon.