Benefits of Vaping for Existing Smokers

Smoking used to be cool, but times have now changed. What was once a symbol of suave and sophistication is now frowned upon and has lost all its acceptability, particularly in social settings. The new cool kid on the block is vaping, and it’s not just a trend, but is here to stay. Vaping has seen immense popularity growth in recent years, and its appeal has caught on with traditional cigarette smokers who are not only looking to take advantage of its healthier benefits, but also bring some buzz back to their social life.

Although essentially the same as smoking, there is one very significant difference between the two, and that is the use of an electronic device called an e-cigarette. What may at first look to be intimidating, the e-cigarette, or vaper, is quite easy to use. With a simple press of a button you release a mixture of flavoured vapour, or water, in addition to the nicotine. This combination helps to satisfy a user’s craving without the harmful toxins that are added to traditional cigarettes. That means, no damaging second-hand smoke for your friends and family to breathe in, and a reasonably healthier smoke for you as you can enjoy your nicotine fix while still appreciating you’re their company. This can only mean positive things for you and your social life. 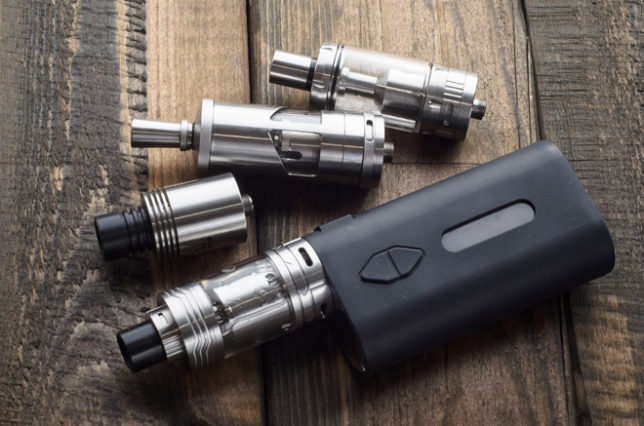 As the vapour released with an e-cigarette is essentially water, non-smokers shouldn’t have any reason to complain about the effect of second-hand smoke, as there isn’t any. This means no offensive odours, no lingering cigarette smoke cloud and no harsh chemicals to breathe in. It also means, as a smoker, not being relegated to the outdoors when you feel a craving coming on. The vapour from an e-cigarette is harmless and will slowly dissipate without any harmful side effects.

Furthermore, for a user, vaping is relatively simple. Gone are the days of having to stop what you are doing to go outside and struggle to light your cigarette while in a shielded position. Vaping can be done from the comfort of your home with a quick and instant push of a button, and you don’t have to drop what you are doing to vape, either. Although vaping is allowed in most public spaces whereas smoking is not, it’s always a good idea to inquire beforehand. For example, you cannot vape on an airplane just like you cannot smoke cigarettes, and many indoor venues do not permit it either, including trains.

In addition to its increased social acceptance, there are many health benefits to vaping over cigarette smoking. By removing many of the harmful chemicals found in cigarettes, such as tobacco and tar, you will begin to breathe easier and your lungs and overall health will thank you for it. In addition, with vaping, you have complete flexibility over your nicotine intake as you can adjust your nicotine concentrations to suit. So, if you are looking to quit your habit over the long-term, this a slow but sure-fire way to ensure you do. To back all this information up, in a recent study conducted by the NHS, it was reported that vaping is 90 per cent safer for users than traditional smoking. Of course, more research needs to be done into the health benefits of vaping, but this news is vastly optimistic for the vaping community.

Apart from improved lung health, there are many other aspects of your overall health that will improve by giving up cigarettes. From a purely cosmetic standpoint, you can say goodbye to stained teeth, sore gums and prematurely aged skin. Although the effects will not be immediate, you will gradually begin to see a positive difference. In fact, it is no surprise that many of Hollywood’s elite are making the switch from cigarettes to vaping. From the likes of Johnny Depp, Leonardo di Caprio, Katherine Heigl, Rihanna and Katy Perry, to name a few, the vaping movement is now in full force and will only get stronger through celebrity endorsement.

The evidence is strong – vaping trumps cigarette smoking in more ways than one. From both a health and social perspective, vapers are not confronted with any of the stigma associated with cigarette smoking. From a cost perspective, irrespective of the initial cash outlay to purchase a vaping kit, over the long term it is a much cheaper habit than having to buy cigarettes from the store.

The key to happy vaping is to always ensure that you have enough flavoured e-liquid on hand to satisfy a craving before it strikes. This shouldn’t be difficult, as the number of e-liquids that are available on the market continues to grow – there are over 200 e-liquid varieties in the UK ranging from cappuccino to blackberry crumble and the traditional rich pipe tobacco flavour. Just remember, with vaping, you can focus on the things that matter – your health and a happy social life.

Disclaimer: Vaping and e-cigarettes are intended for use by adults of legal smoking age. Vaping exposes the user to the toxic and addicting effects of nicotine and may not be used by children, women who are pregnant or breastfeeding, or persons with or at risk of heart disease, high blood pressure, diabetes or taking medicine for depression or asthma. The use of e-cigarettes is not medically recognised as a means for facilitating smoking cessation. This article was sponsored by Vape Club and does not represent the views of The SLOAN! Group.