A new study proves that wholegrain mustard is good for you and that 10g – or a heaped teaspoon – eaten every day, can help to achieve a healthy blood glucose and/or cholesterol level.

The research, presented at the European Federation of Food Science and Technology (EFFoST), was carried out by Tracklements in association with Cardiff Metropolitan University.  The results show that 86% of participants in the study saw a significant drop in their blood glucose and/or cholesterol over a 12-week period.

The research findings are based on 42 volunteers who took part in the trial, all of whom were aged between 40 and 70 years old and were overweight or clinically obese.  The participants ate a heaped teaspoon of wholegrain mustard daily for 12 weeks.  Their blood glucose and cholesterol levels were measured prior to the study, and again at weeks 2 and 12.

This is great news for the UK. If the findings are extrapolated across the general population where approximately 7 million people are believed to be pre-diabetic, this would indicate somewhere in the region of 525,000 people could be helped simply by enjoying a heaped teaspoon of wholegrain mustard every day.

When it comes to the benefits of wholegrain mustard on cholesterol, the research identified that 64% of volunteers saw a drop in their blood cholesterol levels over the 12 weeks, and with an average decrease of 10% in blood cholesterol levels across the sample group, it indicates a promising downward trend for those at a greater risk of developing heart disease, stroke and vascular dementia. This is the same sort of cholesterol reduction seen when following a low-fat diet.

But heart health isn’t the only reason to serve up this brilliantly versatile condiment.  Mustard has been used to liven up food throughout history, there are references to it in ancient Egyptian, Greek and Roman texts.

Mustard seed was introduced to the UK by the Romans.  Cherished by them for its medicinal qualities as well as for its ability to make unappetising meat palatable, no self-respecting Roman travelled without a pouch of mustard seed to plant.  The Romans would grind the mustard seed by crushing it and mixing it with Verjuice or Grape Must (Mustum).  They called the resultant paste Mustum Ardens – meaning “Fiery Must” which is how we get the word “Mustard”.  However, wholegrain mustard completely disappeared in Britain after mustard flour gained popularity in the 18th century until Tracklements launched the first wholegrain mustard in 1970.  Since then wholegrain mustard has enjoyed a robust revival, proving itself a must-have staple of the larder and the table.

Tracklements wholegrain mustards are very similar to those Roman forerunners.  100% natural, the health benefits highlighted by this research are due to the naturally present compounds and there are no additives or preservatives used.  As with all their products, Tracklements make their mustard by hand, using only the very finest ingredients.  The yellow mustard seed is grown in East Anglia the brown seed comes from Canada, both are ground in traditional stone grinders before being mixed with the very best apple cider vinegar from Suffolk and left to mature in barrels for up to five days for a gloriously rounded flavour. 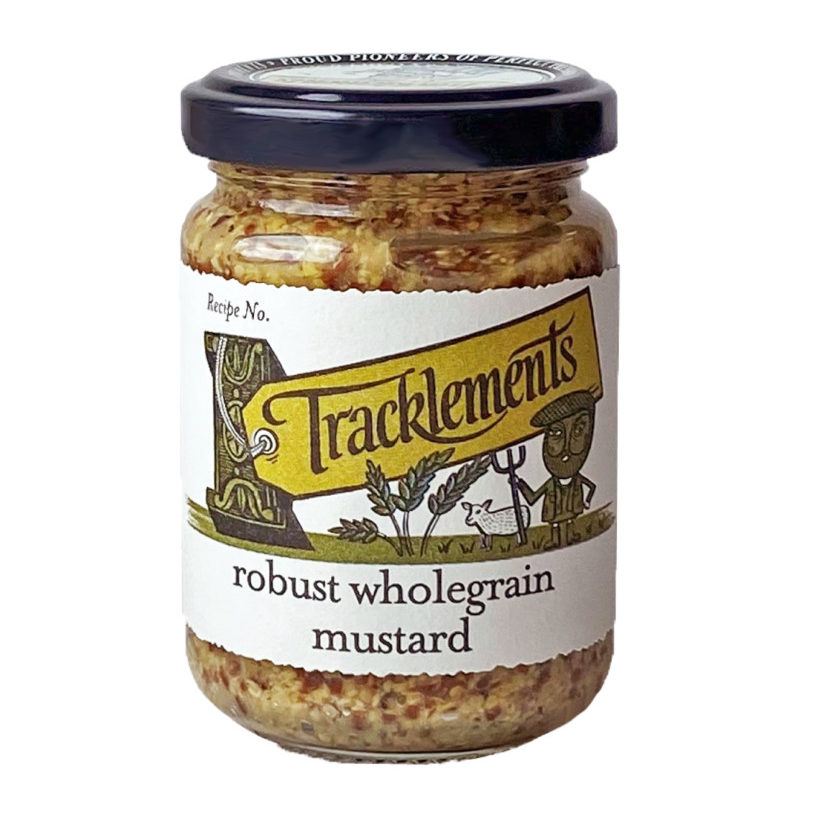 Here are some easy ways to get your daily heaped teaspoon of Wholegrain Mustard into your diet: