By Tristan Gooley – Navigator, Explorer & Author of “The Natural Navigator”.

Our brain loves solving puzzles. There’s a reason why crosswords and sudoku are very popular in addition to crime novels, suspense dramas and murder stories on TV and film. Humans love a good mystery and love solving puzzles. So that’s the key when it comes to exploring.

There are clues absolutely everywhere we look and I mean literally everywhere. Every single thing we see outdoors is trying to tell us something. That’s how our ancestors saw the world and in the present day, modern city explorers can look at the outdoors world in that same way, even in a city park. Here are some examples.

The sun, moon and stars can give us direction. The fastest way to get started as a beginner is to just remember that in the northern part of the world – that is to say Europe and most of North America – the sun is due south in the middle of the day. You can use the moon and the stars in a similar way and there are techniques on my website. However, the sun is the one we’re most likely to see when we’re in a park.

For most people, clouds are in the background. But every single cloud is part of a map particularly the low cumulus clouds. These look rounded and bubbly. Sometimes people call them little fluffy sheep. Every single one of those is telling you that there is something a bit warmer below on the ground. That can be dark woodland in the country but in a city context, it’s showing you the warmest parts of the city.

Those are quite often the dark clusters of buildings or where I am, the clouds form over the car park because that’s dark and the tarmac absorbs the sun’s heat.

Once you’re more experienced in using them, you’ll see that clouds form over hills as well.

Whichever park you go to, just notice where you see these clouds bubbling up more often than other places, particularly on a warm and calm summer’s day. Then draw a line from that down to the ground and see if you can work out what it is. That’s just the start of seeing your landscape in the sky. 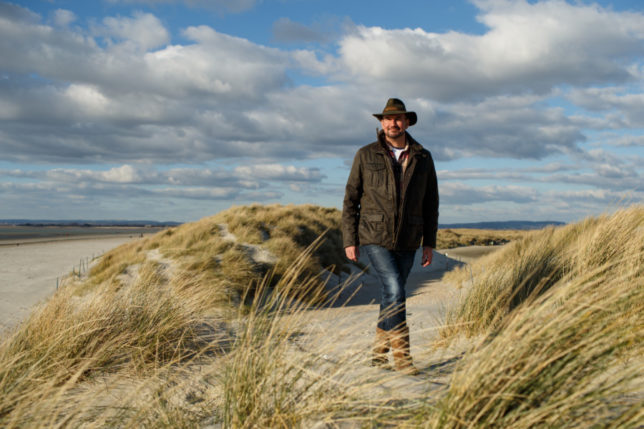 Coming down a bit more, we can also use the wind. Start to take notice of the wind you feel because quite often if you lose absolutely everything else, then the wind you feel will give you a sense of direction.

As a simple example, as you walk into the park, you might notice there’s a breeze on your face. You can then do a little exercise in the middle of the park of closing your eyes and turning around. Just by feeling the breeze on the back of your neck and on your back, you’ll be facing “home” and the route back from where you came.

That’s the explorers’ way. We don’t always look for the nice stuff, we want to know what’s going on around us. 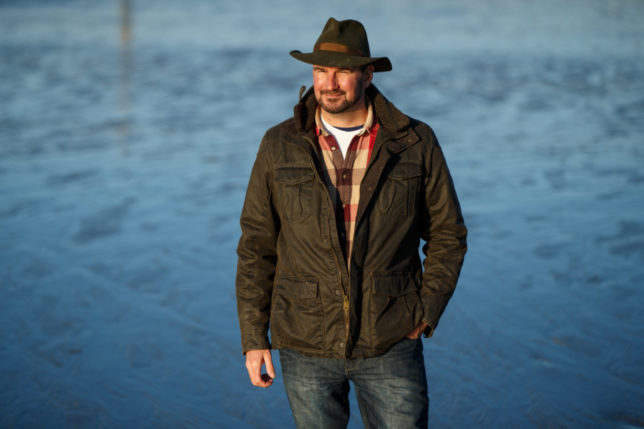 We can also use the paths themselves. Wherever a minor path meets a major path, similar to a T junction in roads, have a look very closely at the ground and you’ll see that it’s not a perfect T shape. There will be a rounded corner so that one side will be more rounded than the other. That is showing you the direction most people turn and that can be very useful in a larger park as that can actually show you how to get out of a park. It also shows you where the patterns that most people are following and that is an example of why understanding is part of being an explorer.

Explorers quite often need to understand where people and animals have travelled most often because it indicates where water is located and where other things are happening.

Take an interest in the birds. Just notice how before the weather changes, the sound of birds change. You get a lot of normal sort of birdsong in spring and early summer but if there’s bad weather about to come such as really windy or rain or a storm, the birds will go silent. At other times, you will hear birds making alarm calls, which are short staccato sort of sounds.

By tuning into each of those areas each time you go into a park, you will reveal so much. You’ll see and sense things that the hundreds of other people in the same park won’t have picked up at all!

This article originally appeared on pages 50-51 in the 26th Edition of SLOAN! 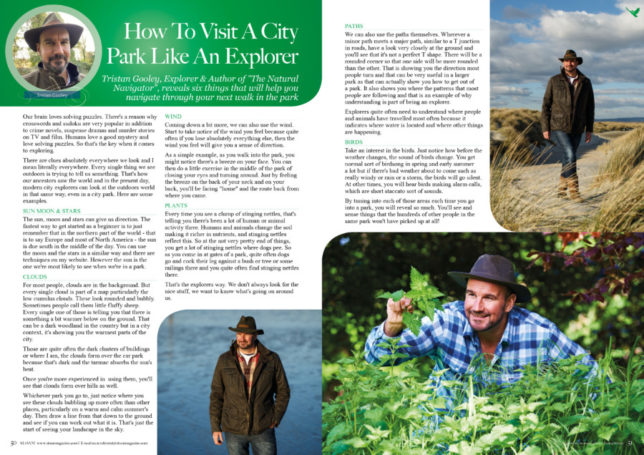 Tristan Gooley (www.naturalnavigator.com) is an author and natural navigator. Tristan set up his natural navigation school in 2008 and is the author of award-winning and internationally bestselling books, including The Natural Navigator (2010) The Lost Art of Reading Nature’s Signs (2014), How to Read Water (2016) and The Secret World of Weather (2021), some of the world’s only books covering natural navigation.

He has spent decades hunting for clues and signs in nature, across the globe, and has been nicknamed “The Sherlock Holmes of Nature” by the BBC. Tristan has led expeditions in five continents, climbed mountains in Europe, Africa and Asia, sailed small boats across oceans and piloted small aircraft to Africa and the Arctic. He has walked with and studied the methods of the Tuareg, Bedouin and Dayak in some of the remotest regions on Earth.

He is the only living person to have both flown solo and sailed singlehanded across the Atlantic and is a Fellow of the Royal Institute of Navigation and the Royal Geographical Society.

In 2020 he was awarded the Harold Spencer-Jones Gold Medal by the Royal Institute of Navigation. It is the Institute’s highest award, given in recognition of an outstanding contribution to navigation.

He has recorded the podcast, ‘The Pursuit of Outdoor Clues,’ and named a type of path – the ‘smile path’.

Tristan has appeared on TV and radio programmes in the UK and internationally. He has also given talks across the world and has written for the Sunday Times, the New York Times, the Wall Street Journal, the BBC and many magazines including SLOAN!.

He is Vice Chairman of the independent travel company, Trailfinders.