Max Wiseberg is an expert in airborne allergens. Here are his top tips for low allergy gardening.

Surprisingly, there are many ways to considerably reduce your hay fever in your own garden. There are a few simple rules to follow and there are an increasingly large number of books and articles on the subject of creating a low allergy garden.

One of the first rules to note is that female plant varieties are best. Male species are usually the pollen creators so don’t plant them. Just plant the females which not only don’t produce the pollen, but might even mop up some of the pollen produced elsewhere in your garden. Of course, you don’t usually find the plants marked male or female so how do you work out which is which? Well, very often the seedless or fruitless items will be the males which will happily produce loads of pollen, so avoiding seedless or fruitless varieties is probably a good start.

Planting fruiting shrubs and trees can also have the added benefit of attracting birds into your garden. Although they will often eat the fruit before you get to it – they will also eat insects around your garden. This helps because insect dander is also bad for allergies.

Another good move is to go for double flowers. These often have petals instead of pollen parts. Double-headed chrysanthemums are good and there are many others. You can now get lots of pollen-free varieties. Clearly, planting these in your garden will be a good thing for people prone to hay fever.

Next on your list should be disease resistance. Along with diseases come all sorts of spores and allergens which will make the allergic’s life a misery. So getting disease-resistant varieties should further reduce the amount of allergens flying around your garden.

Keep the Weeds Down

Keep out the uninvited! Gate crashing weeds will often turn into great pollen producers, so keeping the weeds down should keep the sneezing down, too.

Some people say to grow plants and trees which are used to your climate. The principle here is that if they aren’t growing well, they are likely to get somewhat diseased, produce mildews and moulds and attract insects. So more spores and insect dander mean more hay fever. So if a plant’s not looking healthy, it’s best to remove it.

It is almost certainly better to avoid using chemicals and pesticides, as it has been claimed that exposure to these can often trigger allergic reactions in people who previously had no allergies.

Pollen is out in force in the mornings and the evenings, so it’s best not to do your gardening at these times. If you are going to grow plants that produce lots of pollen, keep them away from the house, or at least away from windows that get opened, doorways, or ‘high traffic’ parts of your garden.

So favour the female varieties, dig in the double flowers and disease resistant, and plant the pollen free. Keep out the chemicals, weeds and non-native. And hopefully, you’ll sneeze a bit less and you’ll be able to see your garden because your eyes won’t be so sore.

Finally, before you go out in the garden put on some HayMax organic allergen barrier balm (www.haymax.biz), to trap the pollen before it gets into your body. Less pollen, less sneezing. 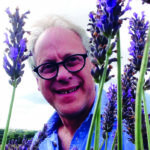 Max Wiseberg is an expert in airborne allergens (including pollen, dust, pet and mould) and is a hay fever sufferer himself. He regularly writes in the press, for publications including Daily Mirror, Daily Express, The Sun, Sunday Mirror, Running Fitness, Health Food Business, The Practicing Midwife, Pharmacy magazines and Your Healthy Living and has appeared on BBC radio, many local radio stations, as well as The Chrissy B Show, Fitness TV and the Holiday & Cruise channel.