Leading psychotherapist Nick Davies – known as “The PTSD Whisperer” – discusses the intrusive thoughts caused by PTSD & trauma and offers advice on how to overcome them using BLAST Techniques®.

The National Health Service (NHS) states that: “Post-traumatic stress disorder (PTSD) is an anxiety disorder caused by very stressful, frightening or distressing events. Someone with PTSD often relives the traumatic event through nightmares and flashbacks, and may experience feelings of isolation, irritability and guilt. They may also have problems sleeping, such as insomnia, and find concentrating difficult. These symptoms are often severe and persistent enough to have a significant impact on the person’s day-to-day life.”

In normal everyday experiences, the sensory information is passed through the Thalamus and, if this experience does not contain anything traumatic, the information then passes through another structure, the Hippocampus which processes it and is stored as a normal memory in the Neo Cortex in both hemispheres of the brain.

However, sometimes when our experience is highly emotionally charged or traumatic, (and dependent on the individuals ability to cope or process the information), the Thalamus triggers a response from the Amygdala (Fight, Flight, Freeze, Appease or Faint) and the memory is stored more in the right hemisphere of the brain in the Central Nervous System.

On the 20 September 2010 the BBC published an article interviewing Dr Peter Naish from the Open University about PTSD where he was experimenting with some glasses with flashing lights in order to treat PTSD, I quote from the article:

“Dr Naish said that some trauma survivors seem to be in a hypnotic state most of the time, and can suffer from extreme hallucinations. In the case of one of the survivors of the London tube bombings of 2005, he said: “In her flashbacks, she thought she was in one of the trains still and was going to die, and in the much longer moments of lucidity, she thought she was lapsing into unconsciousness and her brain was playing tricks.”

“His colleague Dr Ksenja da Silva tested 20 PTSD sufferers who were refugees in Slovenia, and found that they appeared to have brains that worked as if they were hypnotised all of the time. They saw the light on the glasses first with the right sides of their brain, even though they were not under hypnosis. The right half, or hemisphere, of the brain is believed to deal with overall or “global” information, rather than small details. It is this side of the brain that Dr Naish thinks PTSD sufferers are relying on. He said: “It’s the sense that, I’m stressed out in my mind, don’t fuss me with details.”

“Another group of Slovenian refugees who did not have post-traumatic stress disorder had brains that worked as normal – not using their right brains, as if they were not hypnotised.”

Because our unconscious interpretation of the event can affect the response of the Amygdala (unconscious) it can make it “sensitized” to incoming stimuli i.e. that things need a greater response than is actually necessary. We can also suppress our  unconscious response to a situation by ignoring our body’s physical response to it, this masks what is going on unconsciously until it becomes too much and we experience exhaustion, panic, break down etc. The Thalamus behaves much like a magnifying glass and becomes “sensitized” too so now exaggerates the incoming messages from our senses and the Amygdala remains on red alert permanently.

However, research has shown that we can reduce the level of intrusive thoughts and uncomfortable feelings with bilateral stimulation, here is a technique I give my clients for use in between sessions to help them reduce their symptoms. NB: This is not intended as a complete treatment, so if you do have PTSD or trauma, please find a BLAST Technique ® Practitioner in your area to experience the full process.

To find out more about the BLAST Techniques® go to www.blast-technique.com 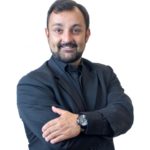 Nick Davies is a well-respected psychotherapist, hypnotherapist, sports performance mind coach, trainer and speaker in the UK and Europe. Known as “The PTSD Whisperer” because of his specialism in treating trauma quickly and permanently.  To see how Nick creates rapid positive change, visit www.ndhypnotherapy.com and www.ndsp.co.uk (sports performance)