The story of the K West building began in the 1950s when it became the home to BBC recording and broadcasting Studios in Shepherd’s Bush. The building was the base of an eclectic mix of BBC services. From The World Service to David Bowie, Jimi Hendrix and Bob Marley, legendary sessions and broadcasts were captured within the walls of K West. 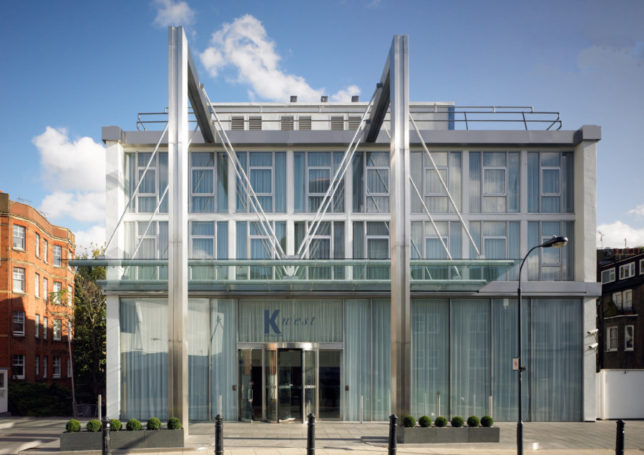 The hotel is described as West London’s Neighbourhood Hideaway. The cherished location is an authentic London residential neighbourhood, a stone’s throw from the vibrancy of Shepherd’s Bush, White City, and well connected to the heart of London. Fashionable areas such as Notting Hill, Portobello Road and Kensington are also just a short walk away.

A defining characteristic of all 219 guestrooms is the generous space, with the smallest being just under 300 sq ft. The rooms are designed to offer a soothing respite from the fast pace of London life, with luxurious oversized beds and a calming colour scheme. Modern flourishes including LCD flat screen TVs, sandblasted glass, and original artwork give the rooms a distinctive K West stamp. 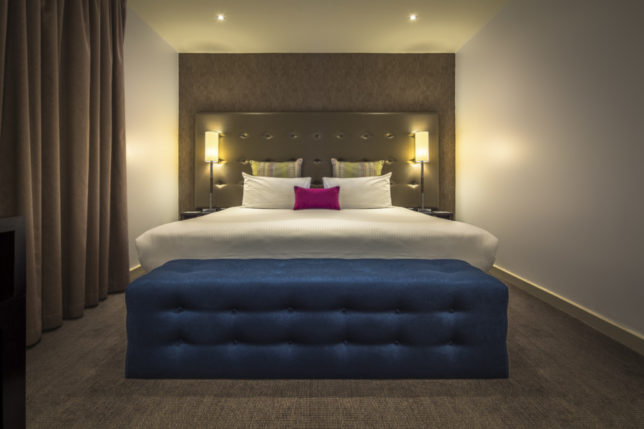 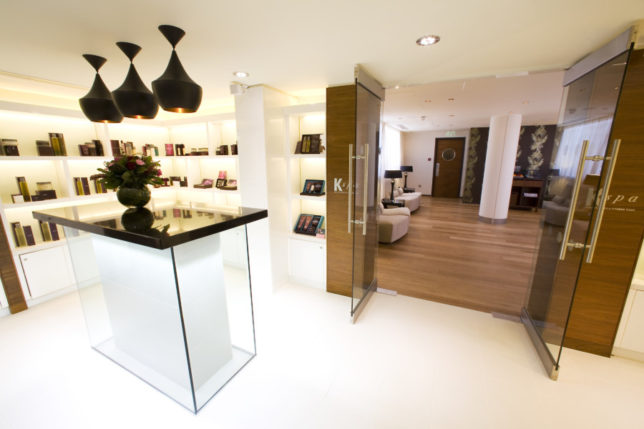 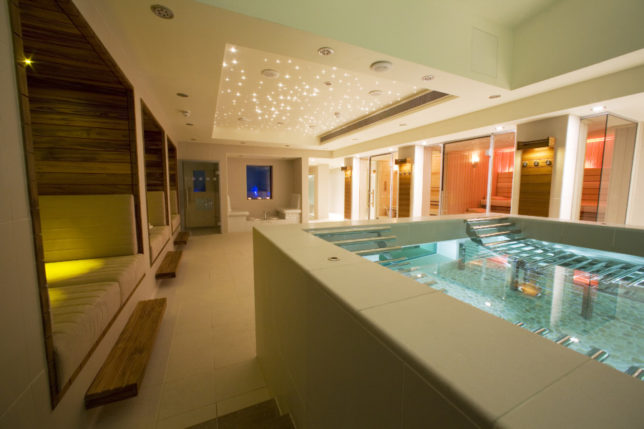 The Library complements the front of house bar, providing a relaxed, informal and creative atmosphere which can be completely sealed off from the buzz of the Studio Bar with black and silver drapes suspended between a giant wooden frame. Statement Andy Warhol style artwork depicting Amy Winehouse is displayed at one end of the room, a tribute to yet another music legend who loved the hotel. Against the opposite wall, a large flatscreen TV sits in the centre of floor-to-ceiling bookshelves, which display an eye-catching collection of coffee table books. 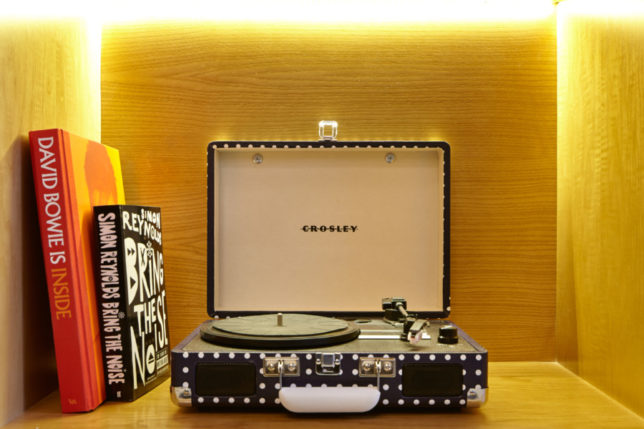 On the mezzanine floor above the Bar, Studio Kitchen is an informal eatery with an urban New York vibe. This is continued in the menu which offers a range of US style ‘dude food’, as well as a selection of modern European dishes. 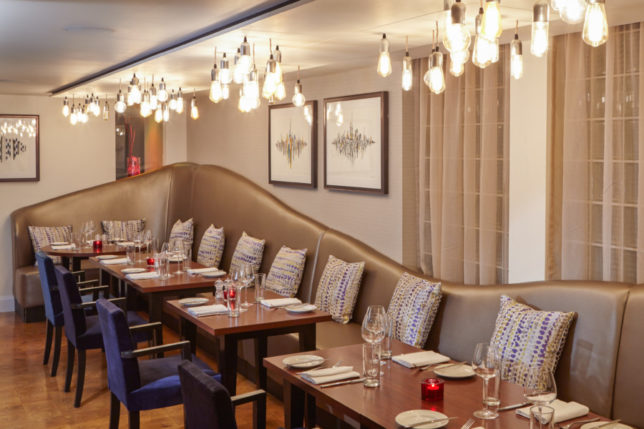 K West Hotel has also just launched a Retro Afternoon Tea served in Studio Kitchen. In true K West fashion, the afternoon tea is served on a retro turntable to reflect the hotels’ rich musical history and give a unique spin(!) on traditional afternoon tea. 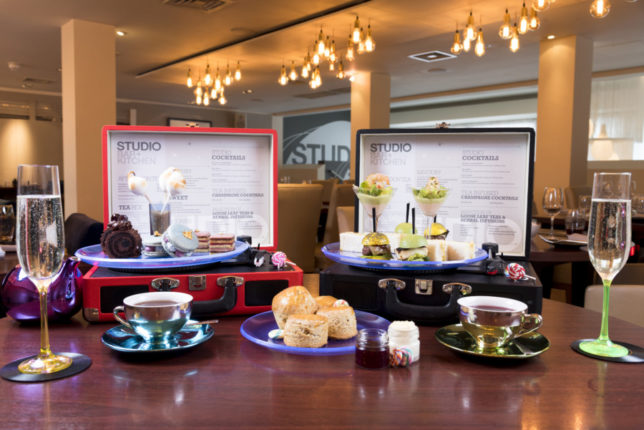 Kick off proceedings with a savoury helping of the very retro Mini Prawn Cocktail spiked with Jack Daniel’s Whiskey and the garish pink of the Beetroot infused Devilled Egg filled with coronation chicken – another nod to the retro theme. Other savouries included Salmon and Cream Cheese Roulade on sandwich bread and a very moreish Mini Halloumi Slider with sundried tomato and guacamole. 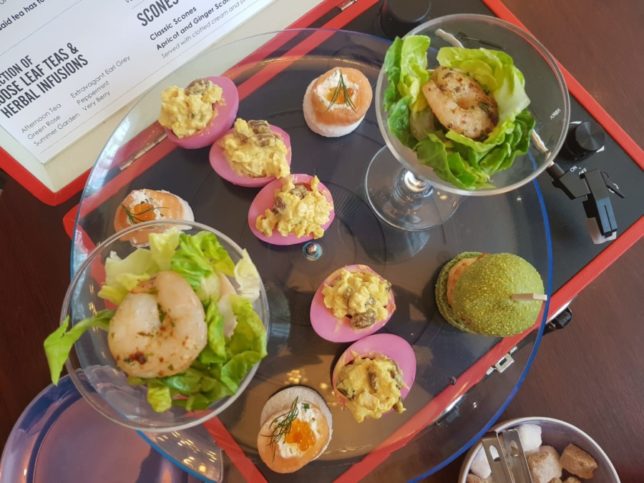 Our favourite sweet treats included Chocolate Cupcake with bubblegum cream topped with a glacé cherry and the lovely Marzipan and Plum Bon Bon coated with dark chocolate. The retro experience was rounded of with a twist on the classic trifle – Berry Trifle with vanilla cream, custard and berry compote. Which of these delectable delights would be your favourite? 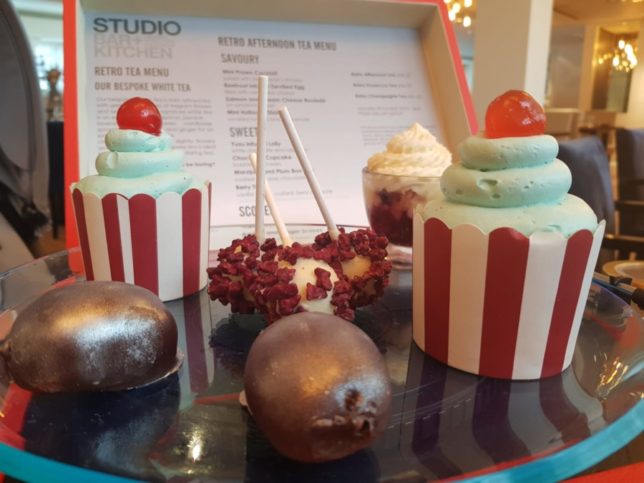 Afternoon Tea in England would not be complete without the obligatory scones and at K West Hotel, the Retro Afternoon Tea is served with both plain Classic Scones and interesting Apricot & Ginger Scones to ring the changes. Both are served with traditional accompaniments of clotted cream and strawberry jam. 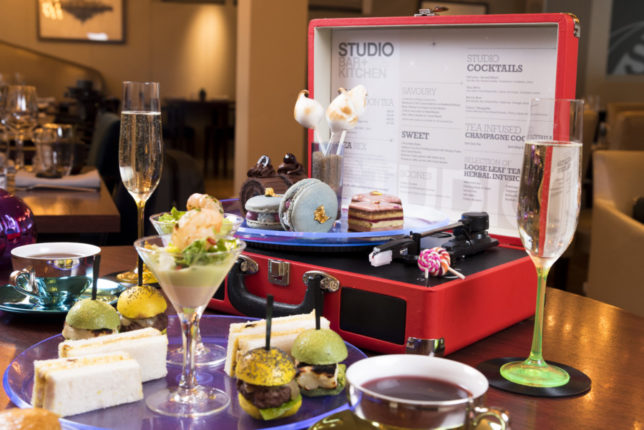 At the end of the Retro Afternoon Tea, you can also treat yourself to a complimentary take away Pick ‘n Mix bag full of retro sweets including Love Hearts, Skittles, Liquorice Allsorts, Assorted Rainbows and Coloured Candy Canes. 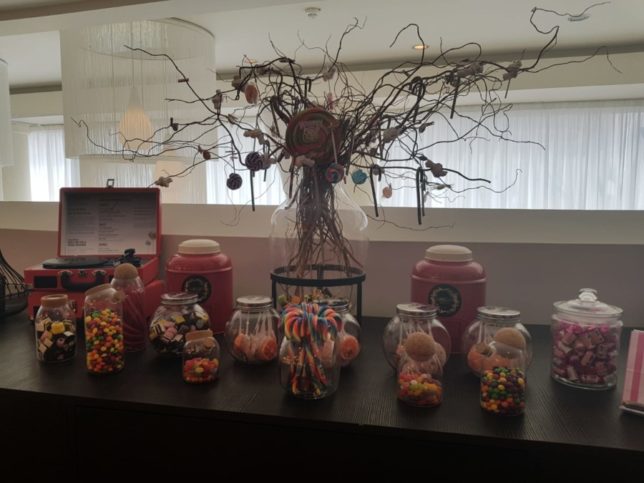 To wash down these delectable delights, try the K West Hotel’s bespoke white tea with gentle undertones of sweet spices and fragrant flowers. Other hot beverages include loose leaf teas like Earl Grey and herbal infusions such as peppermint. Or alternatively, push the boat out and upgrade your Retro Afternoon Tea with Prosecco or Champagne. 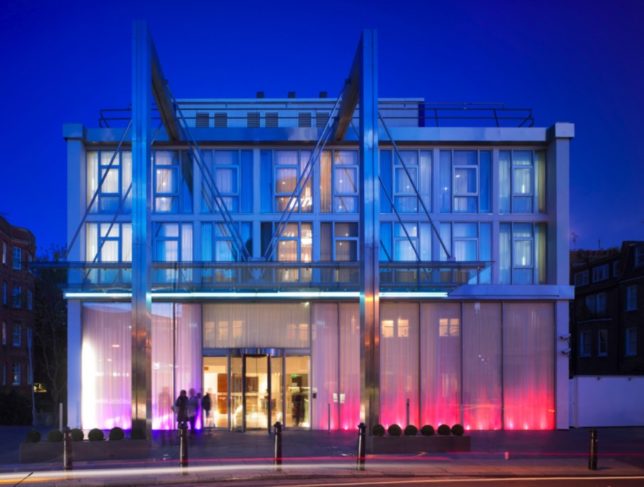 Served every day of the week between 2pm and 5pm, the Retro Afternoon Tea at K West Hotel is £28.50 per person with the Retro Prosecco Tea priced at £36 per person and the Retro Champagne Tea is £41 per person.