Since opening its doors in 2016, Pomona’s has become one of Notting Hills’ trendiest establishments. Championing the use of fresh and sustainable produce, alongside an exemplary wine menu, magnificent cocktail list and unrivalled private event space and outdoor areas. 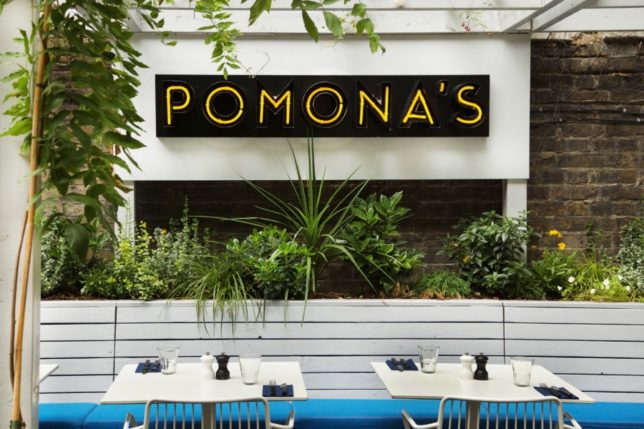 In the spirit of the restaurant’s namesake, Pomona the Roman goddess of fruit trees, gardens and orchards, Pomona’s charming ‘summer garden’ has undergone a distinctly British refresh to welcome a Martin Miller’s Gin Bar that offers signature cocktails and bespoke G&Ts. 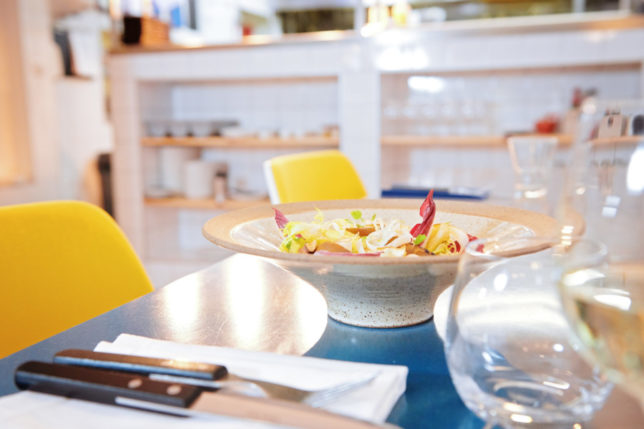 Earlier this spring, Pomona’s appointed the very talented Ruth Hansom as Head Chef. Ruth’s passion for locally sourced British produce befits this favourite neighbourhood restaurant and permeates throughout her exciting new all-day and relaxed fine dining menus, that feature a twist on the traditional a la carte offering, with sharing dishes from the land, sea and earth. 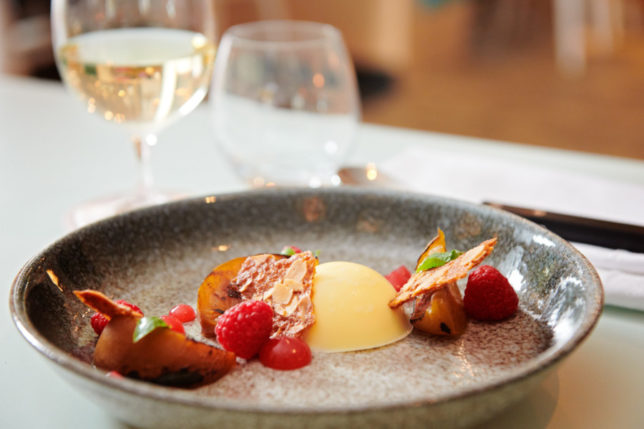 Hansom joined Pomona’s from Luton Hoo hotel in Bedfordshire, where she held the position of head chef in the property’s fine-dining restaurant Wernher. Prior to this Hansom spent five years at the Michelin-starred Ritz London, rising through their culinary ranks to become demi chef de partie. She has been tipped as a rising star in the UK hospitality industry, being the first female winner of Young National Chef of the Year in 2017. 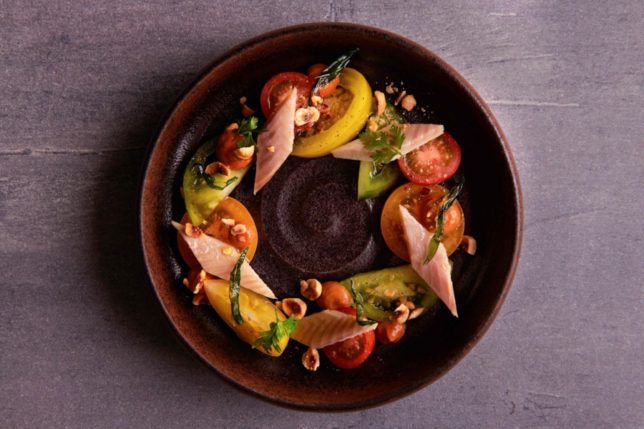 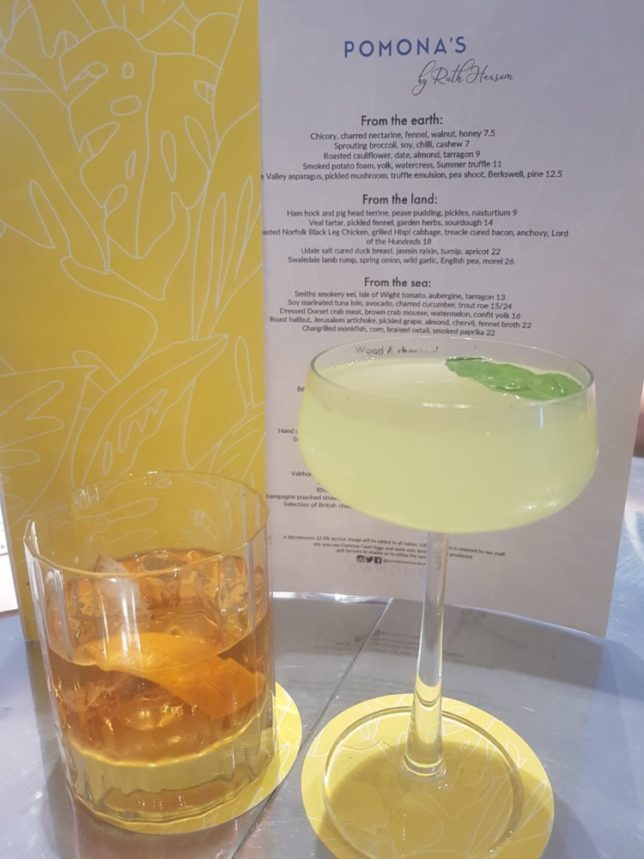 The Homemade Sourdough came with Marmite butter – love it or hate it, we could stop coming back for more. The creamy butter had a delicate Marmite flavour that wouldn’t scare off those who otherwise do not enjoy Marmite.. 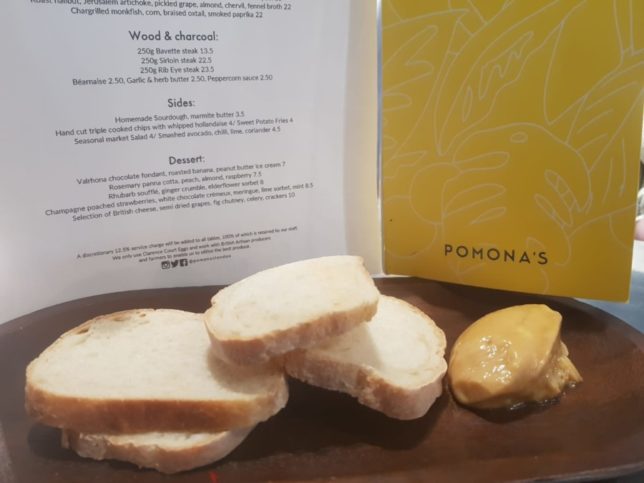 The melt in your mouth honey and truffle gougères were light and packed a punch making them a must for truffle lovers. 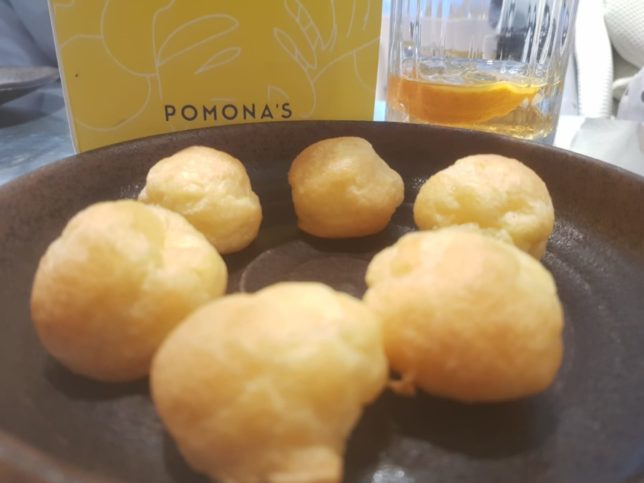 The Veal tartare with pickled fennel, garden herbs and sourdough was light with the veal so tender that it melted in the mouth. A great dish to tantalise the taste buds. 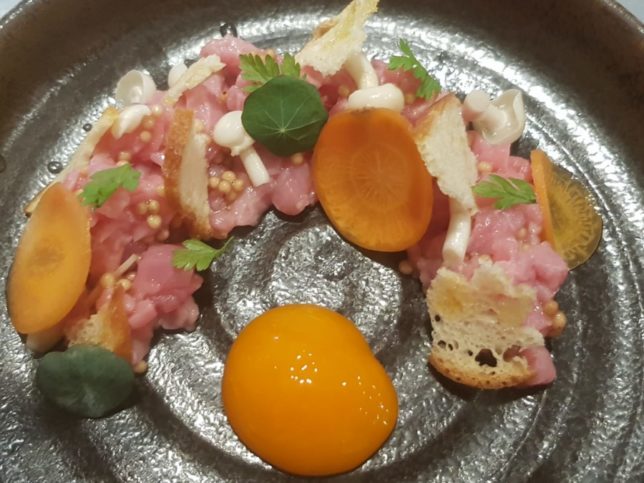 My dining companion had the dressed Dorset crab meat with brown crab mousse, watermelon and confit yolk. This dish was a pleasure from start to finish. The watermelon added a subtle freshness to the crab meat which combined with the yolk and flamed watermelon was a joy to eat. 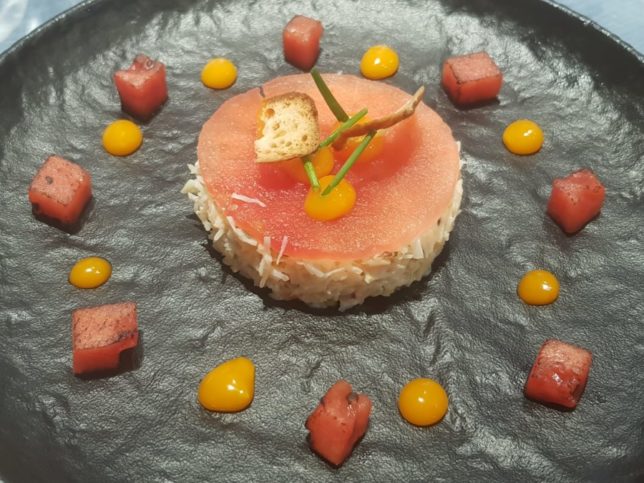 It was rude not to try another dish championing a British seasonal ingredient – so we ordered the Wye Valley asparagus with pickled mushroom, truffle emulsion, pea shoot, Berkswell, and pine nuts. It was clear on the first bite that Pomona’s serves consistently well-executed dishes using high quality produce and the chef definitely knows how to combine mouth-watering flavours to produce dishes that stay moreish to the final forkful. 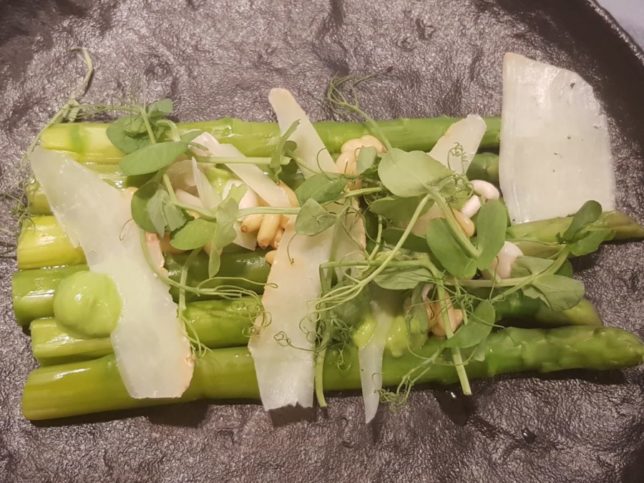 The Udale salt cured duck breast with jasmin raisin, turnip and apricot was seved medium rare. The crunch of the turnip contrasted with the tender texture of the meat which had a lovely crisp skin with a slightly gamey flavour that was complemented by the jus. 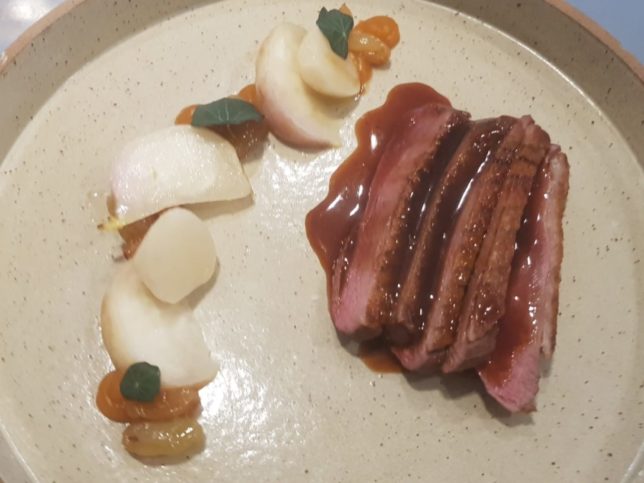 The Swaledale lamb rump with spring onion, wild garlic, English pea, morel was another treat. Served medium rare, the meat was full of flavour. The skin provided the crispy crunch needed to contrast textures whilst leaving the juicy meat to showcase its free range flavour that’s a real palate pleaser. 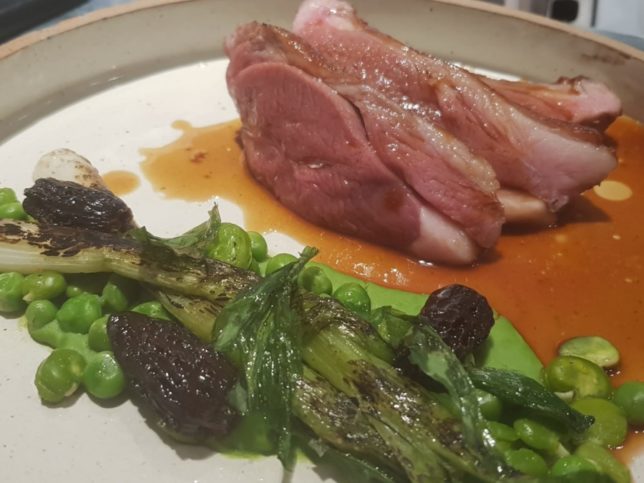 Simple but effective the smashed avocado side dish had a chilli kick tempered by the lime and coriander. 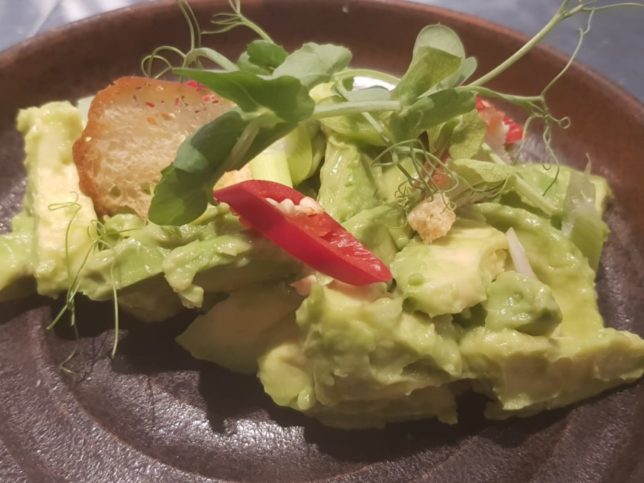 Hand cut triple cooked chips with whipped hollandaise were a restaurant standard that continues the trend of culinary excellence at Pomona’s. 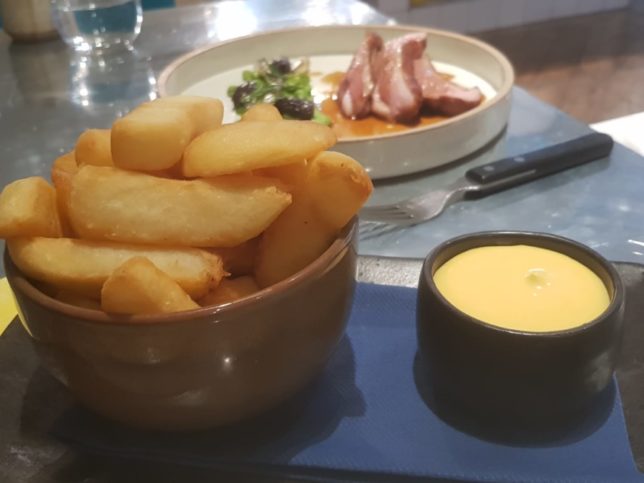 Cocktails continued with a Whisky Sour with a dash of cab sauvignon and The Blueberry – Beefeater gin & St. Germain liqueur mixed with fresh mint, homemade blueberry syrup & citrus, topped up with soda water 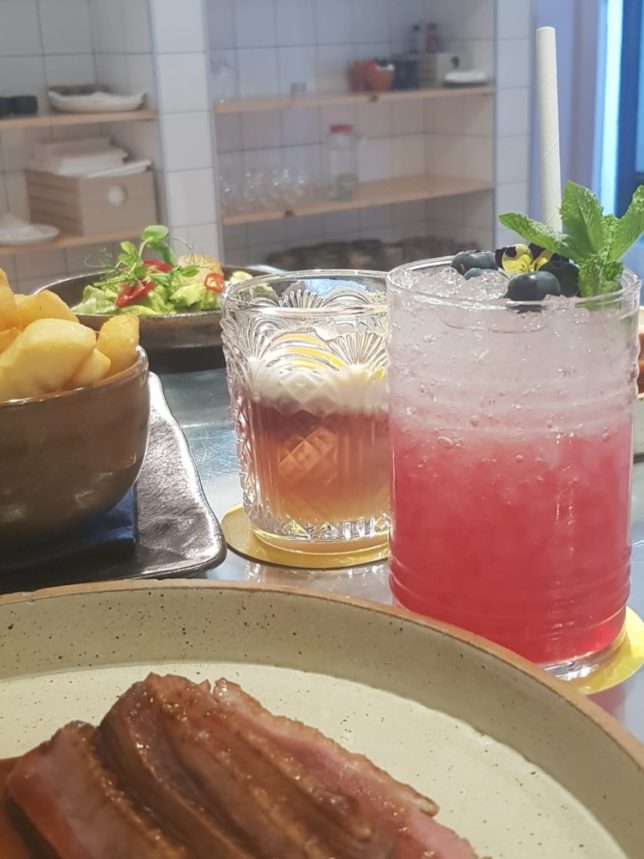 We were excited by the dessert menu and even more so once it was on the table in front of us. The Valrhona chocolate fondant with roasted banana and peanut butter ice cream was a hit. This is a must-try for any nutty chocolate lover. 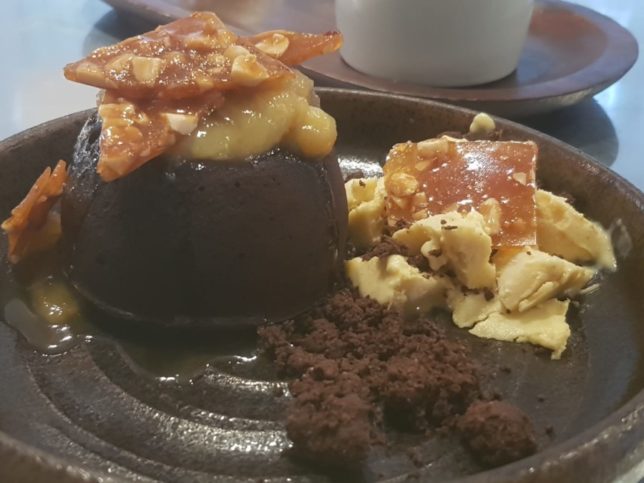 My dining companion ended their meal with the rhubarb soufflé with ginger crumble and a refreshing elderflower sorbet. 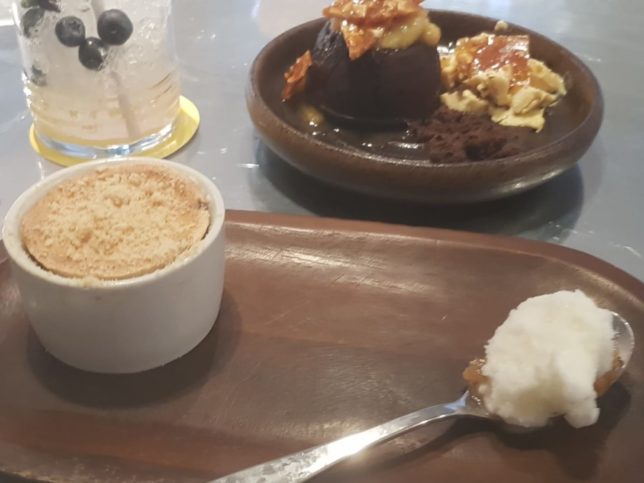 Speaking of Ruth’s appointment as Head Chef, Pomona’s Restaurant Director Jay Decker said, “We want to firmly establish Pomona’s as the go to foodie restaurant in Notting Hill, offering the very best locally sourced, ethically produced British cuisine, I’m delighted to have Ruth onboard, a chef that mirrors our values. With her arrival, a table here will be the hottest ticket in the neighbourhood, and I’m sure our local clientele and new customers, will be bowled over by what’s on offer.” 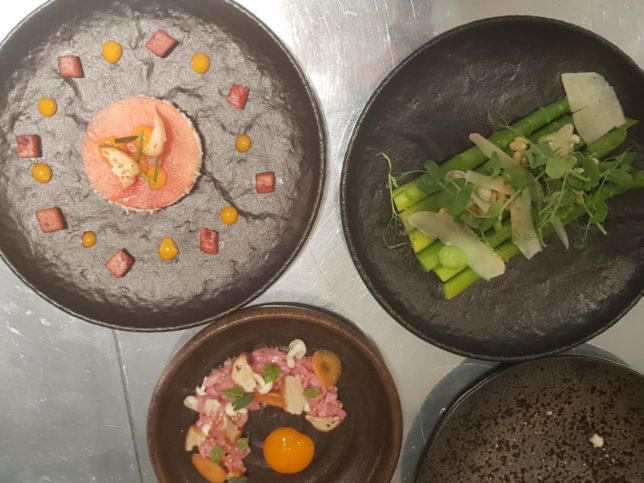 Previously winner of Young National Chef of the Year, and star of BBC Two’s Million Pound Menu, Ruth Hansom said “I’ve been working with Jay and the Pomona’s team to enhance their culinary offering, injecting a twist into the traditional menus. Guests can expect a relaxed, fine-dining experience, with sharing plates inspired by the land, sea and earth, featuring produce sourced from across the British Isles. I’m super excited about my future with the restaurant and the fantastic opportunity this new role offers back in London.”